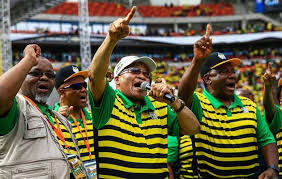 The ANC’s branches are shrinking and capacity within the party is eroding.

These are the words of President Jacob Zuma‚ when he addressed the uMkhonto weSizwe Military Veterans Association’s conference in Johannesburg on Friday.

“We must unite and close ranks. We have seen in the recent past the mobilisation of civil society against the ANC and its leadership and some have fallen into the trap and joined these groups to appear intellectual and morally sound‚” he said.

He warned that those who took part in activities to break the ANC were behaving in a counter-revolutionary manner.

Zuma urged the veterans to “mobilise” and reach out to people to ensure the ANC builds its capacity.

“Due to factional reasons our branches are shrinking in numbers and we are failing to mobilise and that is undermining our character‚” Zuma said.

He also spoke of the recent “challenges” in the ANC‚ saying the unity of the ANC is under threat.

He called on ANC members to end public spats that derail the party.

“We are already under attack on many fronts and we can’t afford any more self-inflicting pain‚” Zuma said.

EKhuruleni mayor Mzwandile Masina lashed out at those asking Zuma to step down‚ saying it was “foreign and un-ANC”.

He also spoke out against the ANC’s alliance partners – labour federation Cosatu and the South African Communist Party — for dictating who can and cannot address them.

Masina concluded by saying ” Mr President‚ let’s ask the Gguptas to give us space to lead the revolution.”