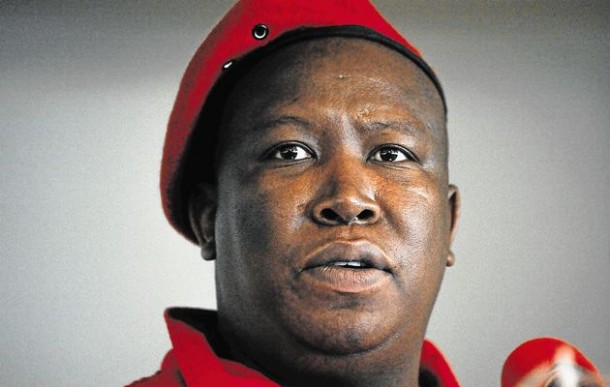 “Zuma‚ our president has become a blesser” – Malema

On Wednesday the opposition party’s leader visited Umjindi‚ Barberton in Mpumalanga as he continued his campaign across the country ahead of the August 3 local government elections.

“Zuma‚ our president has become a blesser‚ (someone who uses his wealth to shower women with gifts) he is blessing his wives. We can’t have a president who is a blesser‚” said Malema.

Malema said the president had spent over R8 million on cars for his wives while the people of Umjindi lived in poverty.

His scathing attack on the president did not end there‚ with Malema also saying that future children would urinate on Zuma’s grave when he dies.

He also said the opposition party would bring an end to corruption in the province‚ once it was in power.

“We come here not to ask for 10 years (to lead the country)‚ we only want five years‚ you will see Mbombela will never be the same again. Ngrayi and DD’s corruption will stop‚” he said.

Ngwenya and Mabuza are accused of only giving tenders to their friends‚ much to the frustration of communities in the province.

Mabuza is said to be a member of the “Premier League” an influential faction of premiers consisting of Supra Mahumapelo from the North West‚ the Free State’s Ace Magashule and Mabuza.

Malema told the about 2‚000 strong crowd of people before him that they shouldn’t vote on their emotions because the ANC was not doing anything for them.

“Stop lying to yourselves and claiming easy victories … change your vote if you want to see change‚” he said.

The field where the people had gathered to see Malema was calm following Tuesday’s skirmish with the police. Before addressing the people of Nkomazi‚ outside Nelspruit‚ the police had allegedly opened fire on an EFF member‚ allegedly wounding him.