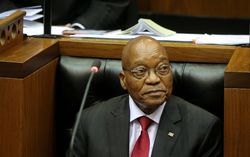 It remains to be seen whether former president Jacob Zuma will attend his late brother’s funeral on Thursday‚ after correctional services confirmed that he still had not filed an application seeking permission to do so.

“The former president is yet to apply for compassionate leave‚” said department of correctional services spokesperson Singabakho Nxumalo on Tuesday.

Zuma’s younger brother‚ Khanya‚ 77‚ told TimesLIVE last week that the family would bury Michael on Thursday because his wife‚ MaXulu‚ had been in hospital with Covid-19.

She was expected to be discharged on Tuesday.

Khanya said the preparations for the funeral had been concluded.

“We don’t know whether he [Zuma] will be there or not. I did tell his wife Bongi Ngema-Zuma about the application‚ but I am not sure whether she did it or not. We will see‚” said the family elder.

Zuma is serving 15 months in prison for contempt of court after failing to appear before the Zondo commission of inquiry into state capture.