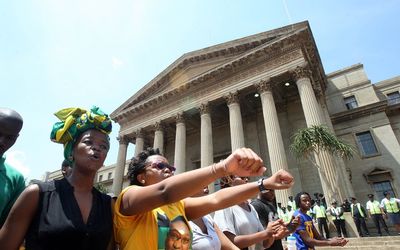 Fees Must Fall student leader Mcebo Dlamini is adamant that the University of Witwatersrand will remain shut until students’ demands are met.

“Tomorrow (Monday) Wits will remain shut. We extended a hand to the university on Friday and we said to them we are willing to discuss and negotiate‚” said Dlamini.

He was speaking outside the Great Hall on Sunday afternoon‚ while students were meeting to discuss strategy and tactics after the university management announced on Saturday that classes would resume on Monday.

“Since Friday till now‚ the university has not come back to us. So we are left with no alternative but to say we no longer recognise Adam Habib (the university’s vice chancellor).

“Habib must know that we are not demanding free education from him‚ he must stop grand standing and address internal issues like suspended students‚” he said.

He also said they are no longer reaching out to Habib as he had failed in his duties as the university’s vice chancellor. Dlamini called on the Wits chancellor to meet the students to pledge a way forward.

The mass meeting is expected to run well into the night