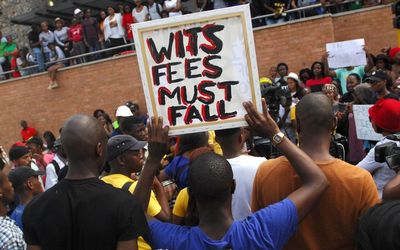 Wits shuts down, seeks to ‘identify those who perpetrated acts of violence’

All activities at the University of the Witwatersrand have been suspended for the rest of the week.

Its senior executive team said late on Tuesday that it was “identifying” those “who perpetrated acts of violence on our campus today” and vowed to “take action in line with the university’s rules and the law”.

The university said it had made the decision after “considering the safety of our staff and students”.

“However‚ residences and dining halls should operate as usual and staff in these areas should report for duty.”

The Wits Council’s executive committee will be meeting on Wednesday “and the university will communicate further thereafter”.

The varsity had attempted to operate as usual on Tuesday‚ despite an expected resumption of protests that broke out on Monday following Higher Education Minister Blade Nzimande’s announcement on fee increases for 2017.

It followed this up with: “Security has been increased significantly and the police are assisting in maintaining law and order.”

Despite this‚ clashes between students and police and security personnel ensued‚ with a number of arrests and injuries being reported.

Some calm returned to the university on Tuesday afternoon after students were allowed to gather at the Solomon Mahlangu House to debate a way forward.

There was no concrete agreement among students on when to march to the JSE to present their demands for more private sector funding of higher education.

Others argued that they should wait for the University of Johannesburg (UJ) to resume classes after a week of recess.

“We should wait until Monday for UJ to resume before we march to the JSE‚” said a student.

But the majority felt that the march should be staged on Wednesday.

Despite a huge police presence of police‚ students still managed to disrupt some classes.

But the situation was calmer compared to earlier when there were incidents of stone throwing.

Students pelted private security staff who were trying to prevent them from entering the Solomon Mahlangu House.

But police arrived and‚ after lengthy negotiations‚ students were allowed to hold their meeting.

Members of the media were prevented from filming deliberations inside the Solomon Mahlangu House.