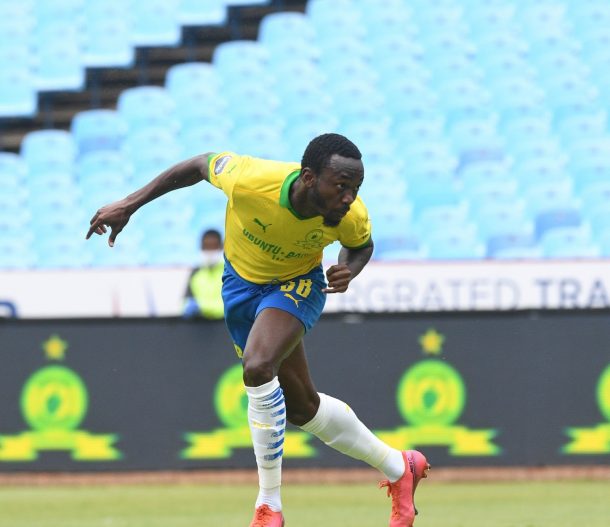 Mamelodi Sundowns striker Peter Shalulile’s exuberant goal celebrations have attracted a lot of attention and while coach Manqoba Mngqithi said he does not mind the unconventional displays of emotions‚ he hoped that the player does not injure himself in the process.

Shalulile created a buzz after he scored a goal at the weekend and then raised eyebrows when he first jumped and then threw himself on the ground in one of the most unique celebrations seen in SA football.

The celebration was a major talking point at the weekend after he scored a last-gasp header to help Sundowns to a come from behind 2-1 league win over Stellenbosch on Saturday.

“We would prefer better celebrations but if he keeps on playing every match and scoring the goals‚ I don’t mind if he celebrates the way he is celebrating‚” said Mngqithi.

“Maybe once I see something it could cause problems for him‚ [then] I will mind. As it is now‚ he has played in each and every match for us and he never gets injured.

“He is a very strong‚ he is fighter‚ a top soldier‚ a very good professional and I am sure that everybody will want to work with a player like that. It will be very difficult to control his celebrations because emotionally we don’t know what happens when he scores a goal.”

Mngqithi revealed that Shalulile is the fittest player he has ever worked with.

“One thing I can guarantee you is that I have never met a player as fit as Peter Shalulile. He’s like that in terms of flexibility‚ in terms of strength‚ in terms of power and that’s why when he goes down‚ he always gets back on his feet earlier than anyone else.

“If you can check the first goal he scored against Black Leopards‚ you ask yourself how a player goes down after the defender but comes back earlier.”

Sundowns return to action at Loftus on Tuesday when they host TP Mazembe where they will be looking to register the double over the Ravens and progress to the knockout stages of the Champions League.

Is this Peter Shalulile's best celebration yet, after netting a 95th-minute winner against Stellenbosch? 😂#DStvPrem