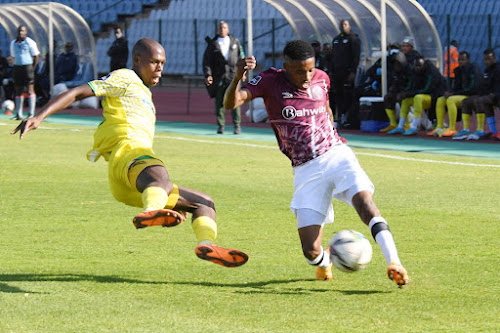 Veteran Swallows FC midfielder Musa Nyatama has offered advice to young Dillon Solomons as he has just completed a big career move to Kaizer Chiefs from the Dube Birds.

Solomons‚ 26‚ was one of the few shining lights in Swallows’ gloomy season that saw the Birds almost being relegated to the GladAfrica Championship.

Swallows saved their DStv Premiership status at the Premier Soccer League (PSL) relegation/promotion playoffs against University of Pretoria and Cape Town All Stars.

Solomons was announced as new signings by Amakhosi alongside his Swallows teammates Kamohelo Mahlatsi and Lehlogonolo‚ AmaZulu FC’s Siyethemba Sithebe and Mduduzi Shabalala from Chiefs’ reserve team on Monday night.

Former Mamelodi Sundowns and Orlando Pirates player Nyatama reckons Solomons is ready to make the step up in his football career but has urged him to keep his feet on the ground.

“My advice would be for him to continue to stay humble and be disciplined as he has been throughout the season‚” Nyatama said.

“Also‚ what I like about him is his versatility. He is very versatile‚ can play left and right-wing at the back. So‚ my advice for him would be to continue to be disciplined and be dedicated to his work.”

Moving to Chiefs‚ who are one of the most followed clubs in Southern Africa‚ comes with high pressure from their fickle and demanding supporters.

Nyatama believes the former Stellenbosch FC and All Stars defender will be able to handle the pressure.