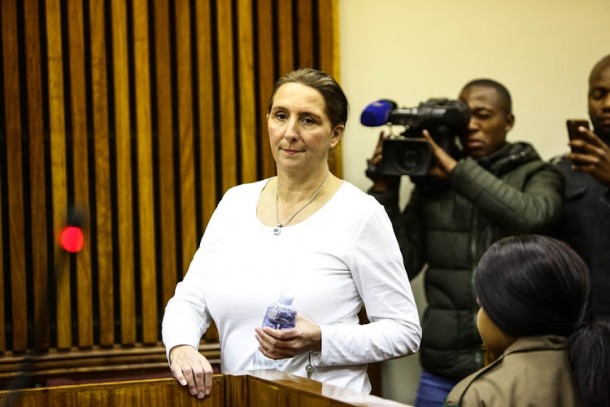 Convicted racist Vicki Momberg will not be representing herself in an upcoming appeal against her conviction and sentence‚ after getting a new legal team.

Momberg was convicted on four counts of crimen injuria in 2018 for using the k-word 48 times against SAPS officers and 10111 operators trying to help her after a smash-and-grab incident in 2016.

Pravina Rugoonandan‚ the presiding magistrate at the Randburg Magistrate’s Court‚ sentenced Momberg to an effective two years in prison for the crimes. After a short prison stay‚ she was granted leave to appeal and ultimately granted bail.

She has now launched an appeal at the high court in Johannesburg to overturn her conviction and sentence.

On Monday morning before judges Viwe Notshe and Willem van der Linde‚ Momberg was initially set to represent herself after her previous lawyer‚ Kingdom Onah‚ dropped her as a client.

Appearing on her behalf was a new advocate‚ Anesh Sukdeo‚ and attorney Wesley Rogers.

Sukdeo told the judges that he sought an opportunity to rework the appeal as Momberg had put together her heads of argument by herself. “We believe it is in the interest of justice that this is dealt with by professionals and not a layperson‚” he said.

The state‚ represented by Jacqui Drotsky‚ said that while it was ready to oppose the appeal application‚ it understood why a postponement could be necessary. Drotsky told the court that Onah had sent them a letter on November 30 claiming he had withdrawn as Momberg’s lawyer‚ which prompted Momberg to file her own heads of argument.

At least two other legal representatives have also withdrawn from representing Momberg – allegedly due to experiencing difficulties working with her.

The case was postponed to allow Momberg’s new legal team an opportunity to fully familiarise themselves with the case‚ so that the appeal can be argued properly. The case will continue in June.

Throughout her criminal trial‚ Momberg has attempted to argue that she was in such a state of panic following the smash-and-grab that she had no control of her actions – a defence known to the court as “sane automatism” or “non-pathological criminal incapacity”.

Magistrate Rugoonandan ultimately believed this to be an insufficient defence. She ruled that Momberg had full control of her faculties when she was dishing out the dozens of racist slurs to her victims.

Momberg entered the courtroom on Monday and immediately began heckling the former prosecutor‚ Yusuf Baba‚ who had arrived to monitor the appeal case. In earshot of journalists‚ she told Baba that she had spoken with his neighbour and warned that he should “watch what he says”.

Baba was unfazed‚ which apparently prompted the 47-year-old Momberg to start berating journalists. She accused them of writing biased stores about her and then used her phone to take photos of them.