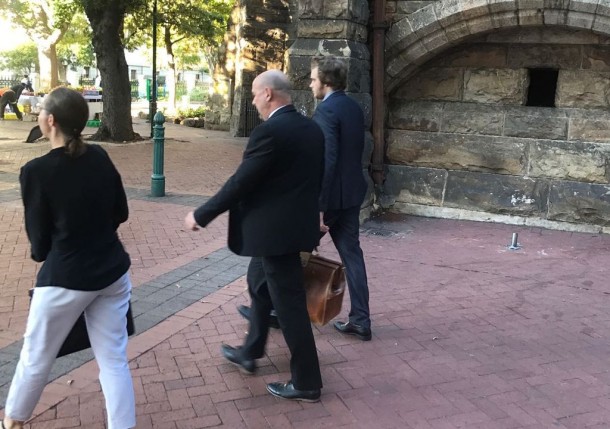 Van Breda tells his side of the story

The axe-wielding attacker laughed while he hacked at members of the Van Breda family.

So claims murder accused Henri van Breda. His side of the story is contained in a grizzly affidavit read out by his lawyer Advocate Pieter Botha in the High Court in Cape Town on Monday.

In 2015 his father Martin‚ mother Teresa and brother Rudi were killed at their upmarket home in Stellenbosch. His sister narrowly escaped death with serious injuries.

Van Breda was paralysed by the sight of a dark silhouette standing over his older brother Rudi’s bed hacking him to death.

According to the statement‚ the horror story started with Van Breda watching Star Trek 2 with 22-year-old Rudi and his father. His sister Marli and mother Theresa were cooking in the kitchen.

After the movie Henri and Rudi were the last to go to sleep in the bedroom they shared.

Both were on their computers and Rudi eventually fell asleep while Van Breda continued watching an animated series about pirates called One Piece.

He said he eventually went to the bathroom “to move his bowels“‚ taking his cellphone with him to play games. All of the doors to the rooms were open.

Then he started hearing “strange banging noises” coming from somewhere in the house.

He pulled up his pants and went to investigate.

What he saw was so strange that the 20-year-old was unable to comprehend what was happening.

According to the statement‚ he saw someone hacking Rudi to death.

The attacker was allegedly wearing a balaclava‚ dark clothes and a pair of gloves.

After he shouted for help‚ the lights came on and his father tried to save Rudi.

As Martin attempted to lunge at the attacker‚ he was struck unconscious and then the attacker started hacking at his limp body.

“The attacker was laughing as he attacked my dad‚” he said.

It was then that he heard his mother call out: “Wat gaan hier aan?” (What is going on here?)

He could not see the attacker anymore but he could hear his mother being attacked.

He claims the attacker was laughing and unconcerned about his presence.

He then confronted the attacker‚ wrestling the axe away from him‚ and said he was surprised at how easily he could disarm him.

The attacker then came again and had a knife in his other hand.

“We pushed and pulled… He tried to stab me with a knife but I could prevent him. I hit at his right shoulder and he stabbed… at the same time. I then realised I was holding the axe backwards‚’’ said Van Breda in his affidavit.

The attacker headed out of the room and Van Breda claims to have hesitated and then followed.

He heard other voices in the house.

He then saw Marli and his mother outside the room and could hear his brother gurgling.

Van Breda claims he then threw the axe at the attacker and subsequently lost his footing and fell down the stairs. He then noticed that the kitchen door was open.

He said he went outside but could not see anyone and went in again. He explained that he wanted to call emergency services but had no numbers.

He tried his girlfriend at the time Bianca‚ to no avail. Then he noticed that the lights in the study were on. He saw that his mother was not moving at all‚ yet Marli and Rudi were.

He then claims to have fallen unconscious and only woke up hours later. At that stage Rudi was still making gurgling sounds.

Van Breda claims to have found an emergency number‚ which he tried first on his mobile and then from the landline.

To calm his nerves‚ he then lit a cigarette in the kitchen.

Van Breda claims he had a bad stutter as a child and that it gets worse under stress. Having been taught a technique to speak slowly and clearly‚ he attempted to use this technique while on the phone to emergency services.

He said he tried Bianca again but cannot remember how many times.

There was likely more than one stranger in the house and the one attacker he saw was black.

When police arrived‚ he was left sitting in his undergarments as detectives came and went‚ one told him: “We do not believe your bullshit story.”

The detective forced him to confirm things that he couldn’t. At that stage he had nothing to eat and was sleep deprived. He claims the police saw him as guilty right from the start and he was not told he had the right to remain silent or to seek legal representation.

Van Breda sat quietly as the statement was read out. When called upon by Judge Siraj Desai to confirm anything‚ he quietly agreed‚ always buttoning his jacket when he stood up and unbuttoning it when he sat down.