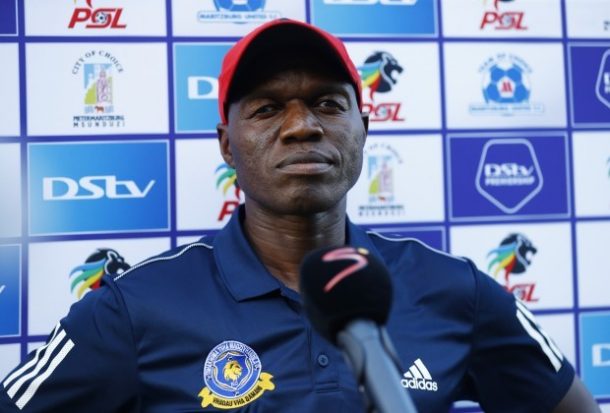 The spotlight is shining on Tshakhuma Tsha Madzivhandila (TTM) mentor Mpho Maleka at the moment and he has revealed the names of the people who inspired him to consider a career in coaching.

Maleka‚ who learned the trade while coaching in the amateur ranks for over a decade‚ listened attentively when he played under Steve Komphela‚ Gavin Hunt‚ Clive Barker and Neil Tovey‚ and these esteemed names eventually planted the coaching seed.

His former coaches also encouraged him to consider venturing into coaching after they watched him put his hand up at training sessions‚ contribute to the drills and absorb all the information they shared.

Maleka achieved his biggest coaching moment at the weekend when TTM booked a place in the Nedbank Cup final after beating overwhelming favourites and defending champions Mamelodi Sundowns in the semifinals.

“My former coaches Steve Komphela‚ Gavin Hunt‚ Clive Barker and Neil Tovey are the ones who encouraged me to consider coaching after my playing days and I took their advice‚” said Maleka.

“I even spent some time with coach Hunt while he was at Bidvest Wits to monitor my progress and feedback. When I retired‚ I decided to start the journey of becoming a coach at amateur level and work my way to the top. I wanted to learn and understand the ins and outs of managing players.”

Maleka said coaching at the lower tier SAB and ABC Motsepe Leagues levels in KwaZulu-Natal and Limpopo prepared him for the rigours of the DStv Premiership.

“I knew that this is a God-given talent‚ I belong where the big fish is swimming and I am not surprised to be where I am today.

“I have been grinding in the amateur ranks for many years with no one really watching‚ but people who have been following my coaching journey are not surprised that I am coaching in the PSL.”

Maleka also gave credit to his co-coach David “DVD” Mathebula‚ who was his team-mate at Black Aces and Moroka Swallows.

“I have come a long way with DVD from our days as players and we share the same philosophy. He also deserves the credit for what we have achieved together with coach Dylan Kerr‚ who was my coach at Aces.”

Since TTM beat Sundowns on Sunday‚ there has been a lot of attention on Maleka‚ but he is experienced enough to avoid succumbing to the distraction.

“We haven’t won anything and we are still down there in the relegation zone in the league. The most important thing for us is to keep our feet on the ground because we have important matches [nine] in the league and in the cup final. We are going to fight in those remaining nine matches in the league to save this team.

“We have spoken to the players [and asked them] not to get carried away after booking a place in the final. For me personally‚ I know how to handle this because I am a former professional player‚ even though I was never a crowd puller.”