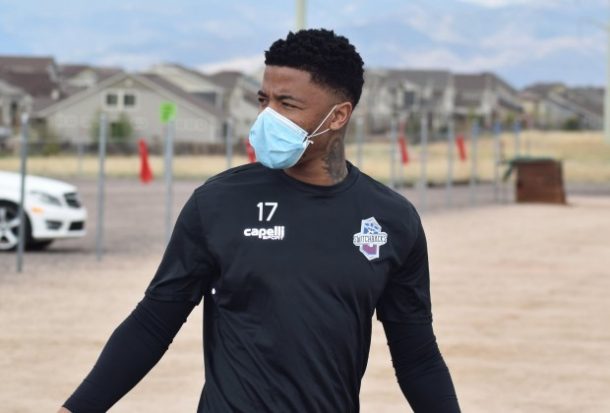 George Lebese could not fit into the style of play that Brandon Truter has planned for his team‚ the coach said on the Birds’ decision not to sign the former Kaizer Chiefs star.

His career at the US club‚ where he moved after a frustrating period struggling for game time at Mamelodi Sundowns‚ was cut short after a year and three months due to travel restrictions regarding Covid-19.

Without a club since March 2020‚ Lebese had been training with Swallows‚ hoping to make a return to the Premiership at the ambitious Birds. However the winger’s name was not among a squad of 32 announced by Swallows on Tuesday.

Truter was asked in Wednesday morning’s press conference before Swallows’ MTN8 quarterfinal against Orlando Pirates on Saturday why Lebese did not get the nod.

“Unfortunately‚ I wouldn’t say we didn’t reach an agreement‚ as George mentioned in the media. We didn’t get to the negotiation part – and I have to be honest in that regard.

“George is a top player‚ there’s no doubt about it. But we also had to get the right players in the right positions‚ and the right characteristics as well.

“Unfortunately for George‚ his style of play and what he can bring to the table didn’t really fit the Swallows way. And we need to look at the club first before we consider anything else.

“Any other day I would take George in my team. You can be the best player but if it affects the whole make-up of the squad and how we want to play then I would rather side with the team than the individual.

“We have a playing style at Swallows that we want to maintain and there are certain aspects within the team that are non-negotiable. And unfortunately George lost out in that regard.

“I wish him nothing but the best going forward. What a nice bloke as well‚ great personality and a top footballer. Sadly at Swallows FC it wasn’t the time for George.”

Swallows‚ who ended a creditable sixth in their maiden season back in the DStv Premiership in 2020-21‚ travel to Orlando Stadium to meet Bucs‚ who ended third.