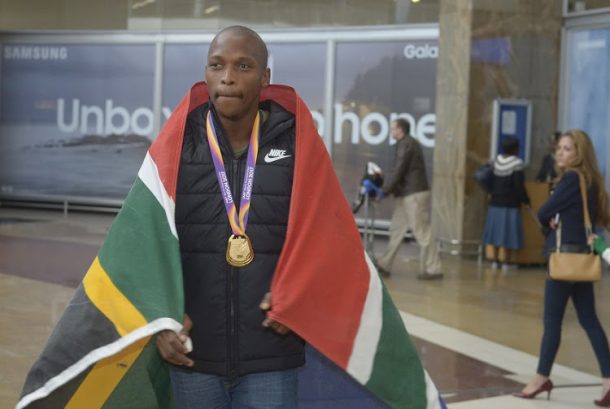 The AIU‚ the independent organisation that manages all threats to the integrity of the sport of athletics‚ announced the suspension on Twitter on Friday evening.

The AIU tweeted: “The AIU has charged Luvo Manyonga of South Africa for whereabouts failures‚ a violation of the @WorldAthletics Anti-Doping Rules. The long jumper has been provisionally suspended.”

The World Anti-Doping Agency’s (Wada) website explains that the whereabouts rule involves “information provided by a limited number of top elite athletes about their location to the International Sport Federation (IF) or National Anti-Doping Organization (NADO) that included them in their respective registered testing pool as part of these top elite athletes’ anti-doping responsibilities”.

The AIU website explains a provisional suspension as “when an Athlete or other Person is suspended temporarily from participating in any competition or activity in Athletics prior to a final decision at a hearing”.

Manyonga has battled addiction and in May was in trouble again after being fined‚ in terms of the Disaster Management Act‚ with public drinking and contravening lockdown restrictions in Stellenbosch.

The 2017 world champion and Olympic silver medallist from Rio 2016 was ordered to appear in court on or pay a R2‚500 admission of guilt fine.

Manyonga‚ who won the 2011 under-20 world championships while competing for Maties‚ struggled with addiction to crystal meth‚ which resulted in his being banned from athletics for 18 months in 2012.

He relocated to Port Elizabeth in 2018‚ although he seemed to have gone off the athletics grid some months ago. Nobody seemed to know where he was.