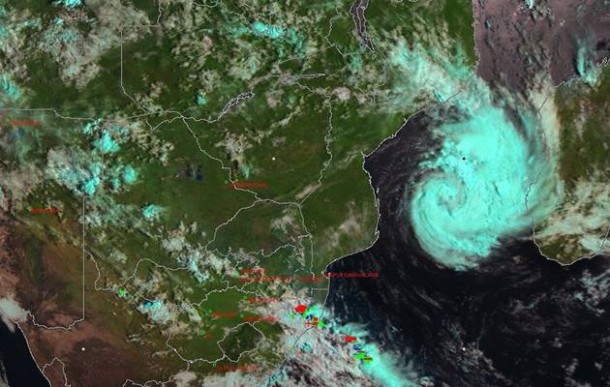 Tropical storm Dineo is now expected to escalate to an intense cyclone‚ with thrashing winds‚ within a day. The South African Weather Service issued an update on the storm’s development on Tuesday morning.

Dineo has grown from a tropical disturbance on Monday to a moderate tropical storm. The latest update indicates that it may grow even stronger.

“The Regional Specialised Meteorological Centre (RSMC) La Reunion has updated the expected evolution of Tropical Storm Dineo which is now expected to reach Tropical Cyclone stage‚ [with] winds of up to 118-165km/h‚ early on Wednesday.

“Further intensification is expected and the storm will reach the Intense Tropical Cyclone [stage‚ with] winds of up to 166-212km/h around midday on Wednesday‚ before making landfall at midnight near Inhambane in southern Mozambique‚” the weather service said in a statement.

South Africa will begin experiencing rain from Dineo on Thursday over the Lowveld‚ moving west by Friday. On Tuesday afternoon scattered thundershowers are expected to develop over the country’s central‚ south-eastern and eastern parts.

Dineo is being closely monitored with further updates expected‚ the weather service said.

The storm’s name was assigned according to a pre-defined alphabetical list for the 2016/2017 tropical storm season in the South-West Indian Ocean.

Dineo will hit Mozambique’s coastline before it reaches South Africa‚ where heavy rain‚ flooding and possibly wind damage may be expected.

Parts of Mpumalanga‚ Limpopo and KwaZulu-Natal are most likely to be caught in Dineo’s grip‚ with heavy rains and flooding later this week.

“Whilst there is much uncertainty regarding the location and timing of the storm’s impact within South Africa‚ the most likely areas to be affected include the Ehlanzeni district (including the Kruger National Park) in Mpumalanga as well as Mopani and Vhembe districts in Limpopo‚ before spreading to other districts in Limpopo‚” the weather service said on Monday.

“Whilst much rainfall can be expected for southern Mozambique as well as parts of South Africa later in the week‚ the system itself will‚ in all probability‚ dissipate within 36 to 48 hours of moving inland.”