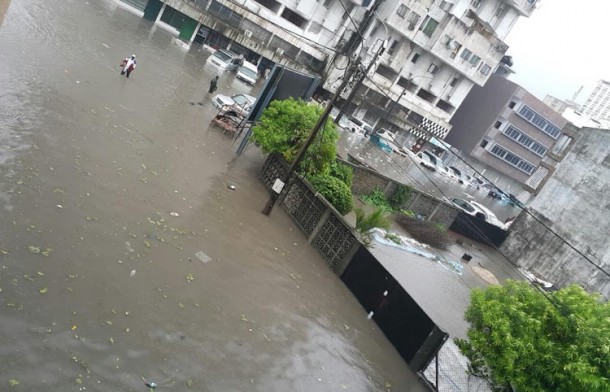 Parts of the Mozambican city of Beira were flooded on Tuesday after tropical storm Desmond made landfall.

The South African Weather Service (SAWS) said Desmond had brought 277mm of rain to the city of Beira – the fourth largest city in the country.

Tropical Storm #Desmond resulted in torrential rain over parts of Mozambique. The city of Beirra (which is in the Sofala Province) received 277mm of rain overnight into this morning.

The World Meteorological Organization (WMO) said the storm will last about 48 hours.

Tropical storm #Desmond made landfall in #Mozambique, with heavy rains and flooding. Now weakening but hazards will continue for at least 48 hours, maintained by development of a new low in the south of Channel of Mozambique. https://t.co/dHfJOthgbm pic.twitter.com/aJzHkDSvBg

Brit In Beira‚ a British mother who blogs from Mozambique‚ posted in a message on Facebook on Tuesday: “Tropical storm Desmond has brought some epic rain ….

“We are fine‚ our house has a few leaks but all safe and sound. My heart just breaks for the people’s houses that have been completely flooded or washed away. As always in these events it’s always the most vulnerable and desperate that suffer the most in the hands of mother nature.”

Accuweather meteorologist Jason Nicholls said at around midday on Tuesday that Desmond was weakening over Mozambique.

“Low strengthening over Mozambique Channel and likely becomes a depression and storm before swinging just south of Madagascar on Thursday.”