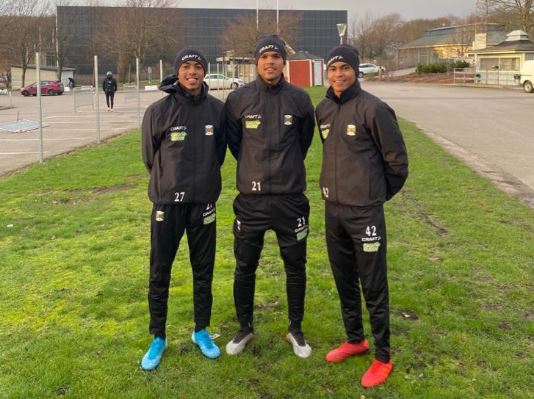 A trio of young South Africans will carry the burden of expectation as Swedish club Varberg get ready to play top-flight football in the Scandinavian country for the first time.

Keanin Ayer‚ Luke le Roux and Tashreeq Matthews are all in the first team squad as Varberg look ahead to the start of the league campaign next month.

This weekend they continue participation in the early rounds of the Swedish Cup‚ which is always played in the weeks before the league starts.

Their first official game of the new season was last weekend and ended in a sobering 5-1 loss at Hammarby‚ who finished third in the Swedish top flight last season.

This Sunday they play away at GIF Sundsvall and next weekend‚ on March 8‚ finally get to play at home.

Ayre hails from Eldorado Park in Johannesburg but went to the Right to Dream Academy in Ghana at the age of 12 and then onto Sweden.

He turns 20 in April and has been included in David Notoane’s preliminary under-23 squad that was named last week for the Olympic Games.

Last season‚ as Varberg won promotion for the first time he was voted the club’s top player and missed just one match.

The 19-year-old Le Roux joined Varberg last month from SuperSport United‚ who had signed him from Stellenbosch FC after he featured in their promotion-winning 2018-19 season.

Matthews‚ who has played for SA at junior level‚ was a prodigy at Ajax Cape Town before going on to Borussia Dortmund in Germany‚ FC Utrecht in Holland and playing briefly last season at Helsingborg in Sweden.

At 19‚ he now has a chance for regular top-flight football.

Varberg is a small town on the west coast of Sweden‚ once described as the least appealing place in the country.

The local side spent all of its 90-odd year history in the lower leagues before last year’s historic promotion.