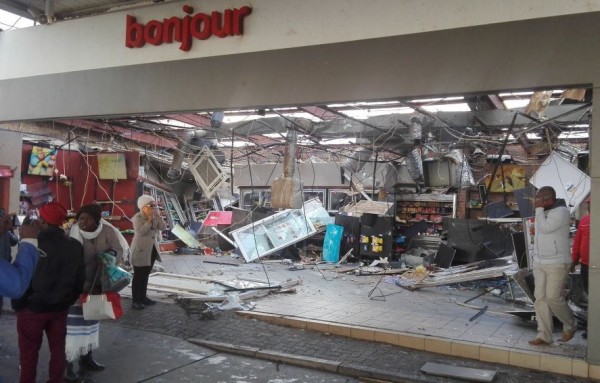 The City of Ekurhuleni has dispersed its metro police‚ safety officers and emergency personnel in response to the tornado that battered the country’s manufacturing hub on Tuesday afternoon.

Ekurhuleni mayoral spokesperson Zweli Dlamini confirmed that the city was sending teams to parts of the city hit by the tornado.

“The metro police‚ disaster management and emergency services – all of them are on the ground right now, basically dealing with the issues as they emanate from each of the areas. As we speak with you‚ the northern part of Ekurhuleni has been the most hit. This cover areas such Kempton Park‚ Tembisa and surrounding areas. We have already received information about the damage to the mall in Tembisa.

We’ve dispersed teams to go and inspect what has happened there to determine whether it necessitates us declaring any state of disaster or whether to activate facilities where we may need to move people‚” Dlamini said.

ER24 paramedics and other services were on the scene. Werner Vermaak, spokesman for ER24, said three people had been treated for minor injuries.

“It is believed their injuries were caused by falling debris. They were assessed on the scene and transported to a nearby hospital. Fire and rescue teams conducted a full search off the area to ensure no one else was trapped. At this stage the teams have not found anyone else injured.”

Pictures and videos of the havoc wreaked by the tornado were being shared on Twitter and Facebook.

A witness at Phumulani Mall, which was struck by the tornado, said she thought the mall was being attacked by robbers.

Vuyelwa Michelle Siko described the horror she faced when she was running errands at the mall‚ situated in Ekurhuleni.

“I was at the Capitec bank doing some errands when the lights first went off and on at the bank. At first I wasn’t paying attention because it was raining and I thought the cables had faults and then we had car alarms go off from the parking lot and then papers starting flying in the bank,” Siko said.

A security guard quickly closed the door as he thought there was some sort of robbery at the mall‚ at this point people started screaming and it got chaotic. I asked to run out because I am claustrophobic. I ran towards a passage by the bank where other people also ran for cover. Suddenly we saw a roof falling off and the car alarms were still going strong‚” she added

Siko said the incident only lasted about two minutes and the tornado then moved towards Tembisa hospital.

“After the wind went away I ran towards my car. A lot of cars were damaged with windows smashed and two trucks overturned. Luckily my car was still fine so I drove straight home because I was worried about my family, and on my way there the road was damaged and street pole cables hanging on the road‚” she said.