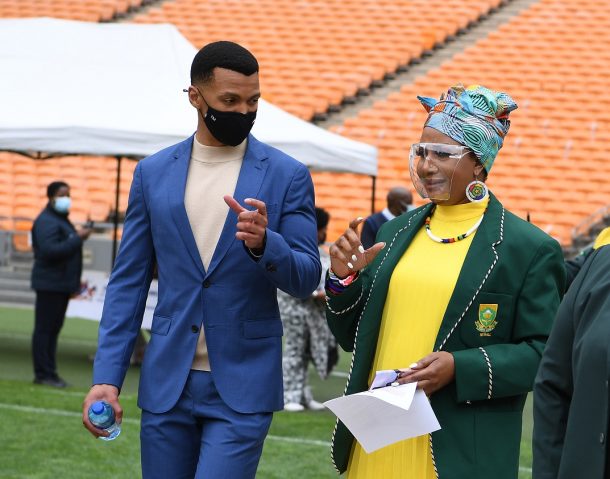 Strengthening the club’s support base‚ development and the women’s team are the low-hanging fruit Mamelodi Sundowns’ new young chair Tlhopie Motsepe says he will aim to pick as he seeks to become his own man running the club for the next five years.

Motsepe‚ made chair of Downs after club president Patrice Motsepe‚ his father‚ was elected to a five-year term as president of the Confederation of African Football (Caf) in March‚ said targeting a younger audience can help expand the club’s fan base.

A new digital magazine launched in September has the hallmarks of a chair who‚ at 32‚ can count himself as firmly a millennial.

“It has been an incredible journey and you can’t play down being in a position like this‚” he said of his start to senior football management of a continental brand at such a young age.

“It’s an incredible honour and it’s also a very important responsibility to have.

“But I was a fan of football before I was chair of this club. So it’s all about making sure I can stay true to my love of the game‚ making sure that where I can make a difference it’s for the good of the game.

“So among a lot of the things I’ve been able to do‚ already we are putting very high on our list our ladies team and of course our academy teams. Because these are grass roots opportunities for us to do one thing‚ which is to make more people fall in love with the game.”

Sundowns’ women’s team are emulating the men’s famous continental successes having qualified in September as the Cosafa entrants to the eight-team finals of the inaugural 2021 Caf Women’s Champions League to be held in Egypt later this year.

“I hope it inspires a lot more girls. I hope it makes young girls who play this game look at our stars‚ our captain Zanele [Nhlapo]‚ the midfield maestro Oratilwe [Mokwena]‚ and that it gives them encouragement.

“When I was watching football [as a child]‚ you fall in love with moments where you see our national captain lift the Africa Cup of Nations‚ and you say‚ ‘Wow‚ I wish I could do that’. I’m hoping that when those young girls saw Zanele lift that [Cosafa] cup they said‚ ‘I hope I can do the same one day’.”

Sundowns are the most successful big three club on the field by far of the last 10 years‚ including the 2016 Caf Champions League trophy and five Premiership titles in six years since 2015-16‚ the last four on the trot. They have always lagged behind Kaizer Chiefs and Orlando Pirates in numbers in the stands.

Motsepe was asked how he can be his own man in his five years in charge of the Brazilians.

“I think with time we might see more of the club being a bit more exciting off the field. It always goes back to inspiring people through sports‚” the chair said.

“I’m proud of where the ladies team is going‚ and of what our marketing team seems to be doing. We’re launching a digital magazine. There are a lot more visual ideas coming.

“The future of football also has to be with the youth and a younger audience. If we don’t make sure young people are inspired by football there are so many things contesting for their attention now‚ like Netflix.

“It’s worse that sometimes you don’t want to go to a stadium because in-between that you’re watching something on your laptop‚ your phone or TV.

“So we have a duty to make sure young people are inspired by this game and fall in love with it. But it’s not just young people‚ it’s women‚ it’s people across our continent and even globally.

“We should be able to make people fall in love with our game and being African through our football club.”