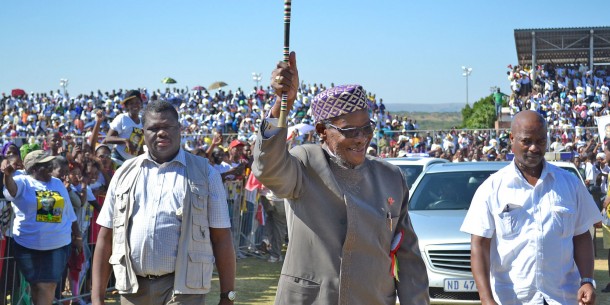 These elections will mark our comeback: IFP

The Inkatha Freedom Party has an excellent chance of regaining KwaZulu-Natal wards and towns lost in previous elections‚ and next week’s poll would mark the party’s comeback‚ its provincial chairperson Bonginkosi Dhlamini said on Thursday.

“[The] Zululand district is ours. Our chances of regaining metros in [KwaZulu Natal] has vastly improved since the National Freedom Party will not be participating in the local elections”‚ he said.

Dhlamini was speaking at the sidelines of an IFP pre-election “meet and greet“‚ in Meadowlands‚ Soweto on Thursday.

“We have gained back five of the 22 metros that we had previously lost. We will also be retaining Ulundi. UThungulu district might be ours‚ the chances of us getting it are in our favour. We have our eyes set on the Mkhanyakude municipality. We are super confident that certain municipalities will be under the IFP.”

But Dhlamini said his party was under no illusion when it came to the Gauteng municipalities.

“The polls will tell you that Gauteng metros could be anyone’s game. We are campaigning in Gauteng to increase our numbers in the metros so that we play a role in the formulation of local government.”

He said these elections would mark the comeback of the IFP.

“We want to increase our voices in all municipalities. Our performance from 2011 till now tells you that we have turned a corner in Gauteng‚” Dhlamini said.

IFP councillor candidate‚ Zithulele Dhlamini‚ addressing hostel residents said they were not trying to sway people from their political parties of choice‚ but they needed to vote for him because he‚ unlike the other candidates‚ lives in the area and knows their problems.

“You can love your [African National Congress] and [Economic Freedom Fighters] so much that you hop on one leg‚ but you need to vote for someone who will be able to lead you in the local government sphere. When you experience power failures for days‚ you call me‚ but when you vote‚ you vote for the opposition‚” Zithulele Dlhamini said.

Sibusiso Phakathi‚ an IFP councillor at the City of Joburg said : “You can vote ANC and EFF but after the fourth [of August] you will come back to stagnant water that you have to jump over every day. You will come back to the broken toilets because those people don’t know what challenges you face.”