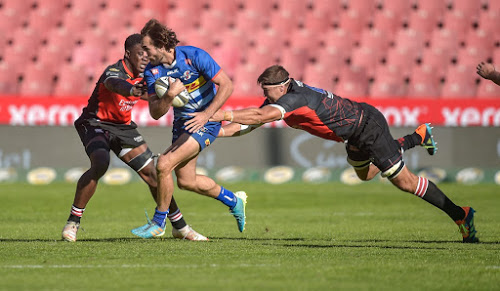 Their 39-37 defeat in the Rainbow Cup SA against the Stormers will be hard to stomach for the Lions.

Having set the tone for much of the game‚ the Lions faded in the closing stages and dropped their guard‚ the ball‚ points and possibly themselves.

They had done the hard yards and played themselves into position to win their first match of the competition before the Stormers scored 10 points in the last two minutes.

“The Lions were exceptional in the scrums‚” noted Stormers coach John Dobson about how his team’s strength was nullified by the claws-out Lions.

The hosts brought some cutting edge in attack and scored some long range tries that would have delighted the Ellis Park faithful had they been allowed to attend.

In the end‚ however‚ the Lions made some crucial errors.

“I think in the last two minutes our decision-making could have been better‚” lamented their coach Ivan van Rooyen.

“That happens through different scenarios in training or experience.

“Had we held on in the last minute there could have been a lot of praises for individuals and for the team. I thought we were brave in attack and I think we put them under pressure with our kicking game. Just not good enough in the end.”

One of the players who came in for praise anyway was new flyhalf Jordan Hendrikse. He delivered a composed and confident display that belied a player of just 19 years old.

“Playing in a game like that as a 19-year-old‚ and playing the way he played is really exciting‚” said the coach.

“He has a special gift and a special talent. It is more than him kicking the ball prodigiously‚ but it is the confidence he brings and how he organises around him. I’m really excited and really happy for him. We could feel the difference.”

Their scrum stood firm against the much vaunted Stormers’ front row.

“We are proud of the scrum‚” enthused Van Rooyen.

“Someone meone like Asenathi (Ntlabakanye) playing the last 20 minutes at 22 years old is invaluable experience‚ the same with PJ Botha. We fronted up well and the system is working well.”

Ultimately though Van Rooyen was left to count the cost of another defeat.

“There were moments where we weren’t consistent enough‚ or good enough. Also some brilliant moments. It is not nice. The guys are hurting. It is our responsibility to stand up for next week.”

As head coach he also has to make sense of their defeats‚ which are now starting to stack up.

“In all three matches we were in the game for 75 minutes or more and there are a lot of lessons we can take out of it. I thought we have improved every week.

“I’m torn in two. I thought we were good for almost 80 minutes but not the last minute and a half. There were two big moments in the last two minutes. It’s heart-breaking but I’m proud of the guys.

Van Rooyen says he wants them to: “keep on growing in mindset and wanting to get better.”