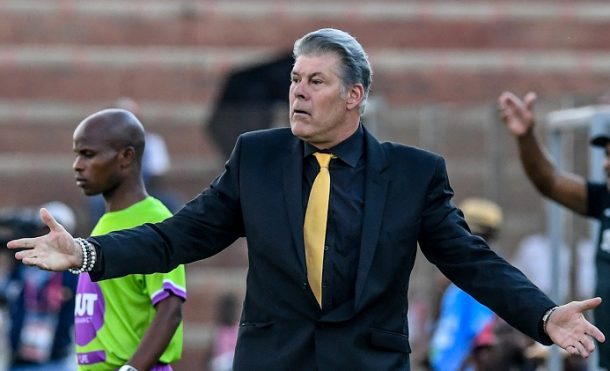 Mpengesi sacked coach Dan Malesela on Sunday morning after an embarrassing 1-5 league defeat to Maritzburg United on Saturday night. Eymael was appointed as the club’s ‘technical advisor’ this week‚ with Zwide-born coach Siyabulela Gwambi assuming the head coaching job on an interim basis.

But insiders told TimesLIVE on Wednesday that Gwambi was merely warming up the seat for Eymael‚ as the Belgian would ascend to the top job once Mpengesi convinced the Eastern Cape provincial government‚ other political heads in the province and the SA Football Association (Safa) to approve the appointment.

Eymael remains a hugely controversial figure among fans‚ media‚ politicians and even other coaches in SA after the Belgian was fired with immediate effect by Tanzania Premier League side Yanga Africans in July last year for calling the club’s fans “illiterate and monkeys”. He later apologised for his comments on social media.

The Eastern Cape provincial government has not yet responded to the decision to appoint Eymael‚ but the EFF wasted no time in firing a salvo at the Chippa owner.

“This racist was rejected by Safa last year when he planned his return to the country and province‚ and [Safa] announced that it intended to oppose his application for a work permit at home affairs‚” the party said in a statement in which it rejected the appointment of Eymael. “The owner of Chippa United has once more stunned the nation and province by appointing the same racist coach.”

It added: “We want to reiterate our stance that we will ensure Luc Eymael won’t work in our province‚ he is not welcome and we don’t have room for racists in this country. If Siviwe Mpengesi knows what’s best for his team Chippa United‚ he will withdraw the appointment of this unrepentant racist from Belgium‚ the country of King Leopold who killed black people in Africa. We are a country with a dark past [that] still deals … with its challenges of racism … we don’t need another racist to add to our problems.”

Mpengesi initially tried to hire Eymael in December last year just minutes after sacking then coach Lehlohonolo Seema. Safa expressed its unhappiness with the decision in a statement issued after Eymael was confirmed as Seema’s replacement‚ saying it would write to the minister of home affairs to object to the granting of a work permit for Eymael. It also said it would ask the ethics committees of Fifa and Safa to “charge Mr Eymael‚ as his despicable conduct is a violation of the codes of both bodies”.

On Sunday‚ Mpengesi wrote a letter to Safa seeking clarity on whether the Belgian was allowed to work in SA.

Safa has not yet responded but seemingly softened its stance on the matter last month after Eymael had taken the matter to the Fifa ethics committee. Safa said at the time it would not object to his right to be employed in SA‚ adding that its stance was based purely on the seriousness of the allegations against Eymael‚ which went against its statutes.

After the initial outcry about Eymael‚ Mpengesi withdrew his appointment and hired Malesela as coach.