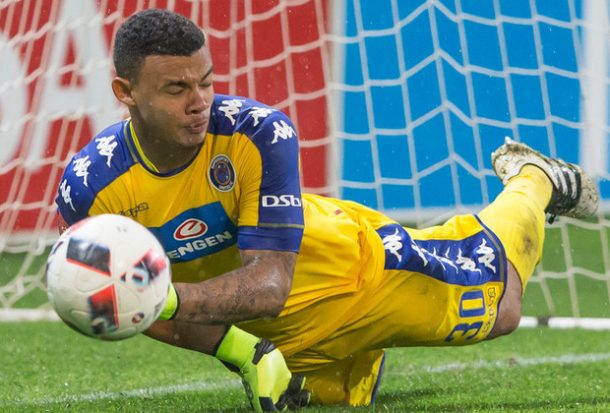 Supersport United coach Kaitano Tembo has paid tribute to goalkeeper Ronwen Williams after he played his 100th consecutive match for the club in a drawn league encounter against Swallows FC at the Lucas Moripe Stadium on Saturday.

Tembo said Williams is a symbol of what a SuperSport player should be all about and opined that the 29-year-old has developed into a complete player since meeting him as a 16-year-old at the club’s academy.

“Ronwen is the true reflection of a SuperSport United player‚” the coach said.

“I’ve known him since he arrived at the club [as a 16-year-old] when I was still playing… it was towards the end of my playing career.

“I ended up also coaching him at the academy and at Under 17 [level]‚ and he’s [spent his whole career at the club].

“I think we use Ronwen as a guide to the younger players from the academy to the first team.

“He still wants to win trophies with the club and a lot of younger players can learn a lot from him.

“I’m happy that he’s reached this milestone and he really deserves it. He is one player I think still wants to achieve more‚ and he deserves to be the captain of the club.”

United stretched their unbeaten record in the league to 10 matches after the 1-1 draw kept them in second place on the Premiership standings.

Tembo bemoaned the injury of key player‚ Teboho Mokoena‚ who like Williams grew up in the club’s development structures.

“I was happy with Jammie Webber‚ Sipho Mbule and Lucky Mohomi in the midfield‚” said Tembo of the players he
could turn to when searches for someone to fill Mokoena’s role.

“I was happy with Lucky Mohomi. This is his second game in a row in a very long time.

“You can see that he’s still lacking in terms of match fitness and that’s why he was cramping towards the end‚ and that’s why we had to take him off.

“But I was quite happy with his contribution and way he played.

“Sipho Mbule also stepped up and took responsibility in the midfield. I think he was the focus of most of our attacks.

“He’s got about five assists and three goals at the moment‚ and that’s what I expect from players like him‚ not just to use his skill for entertainment only but to also make sure he uses them for us to win matches.”

Tembo believes that his charges are getting stronger and appear to be better equipped than they were in the past two seasons.

“We’re improving from the previous two seasons where we couldn’t grind results when we needed to‚” said Tembo.

“Now we’re getting there‚ we’re improving as a team and I’m quite impressed with each and every game these players play‚ especially the younger ones who are getting better and better.

“I’m happy with where we are at the moment‚ although I still feel we can do better.”