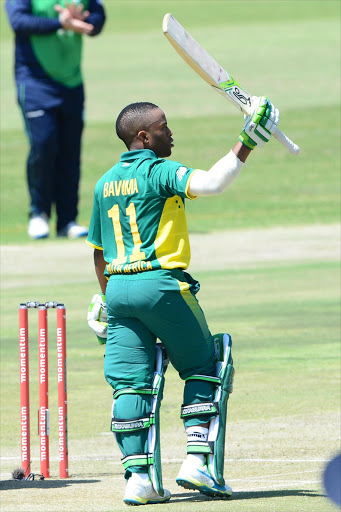 Temba Bavuma has been ruled out of the remainder of the ongoing ODI series against Australia to allow him to continue with his conditioning and rehabilitation following a right hamstring strain.

Rassie van der Dussen has been named as Bavuma’s replacement and he arrived in Bloemfontein on Wednesday to link up with the rest of the squad.

SA take on the Australians in the second ODI match at the Mangaung Open on Wednesday looking to take an unassailable lead in the three-match series after their dominant win in the opening match in Paarl on Saturday.

Bavuma made 26 off 30 balls as the Proteas won convincingly with 74 runs against the Aussies in the opening match.

Cricket SA said the withdrawal of Bavuma‚ who is rapidly establishing himself as a polished and quality top order white ball batsman‚ is a precautionary measure with the daunting tour of India for a three-match series later this month looming large.

“He will remain with the squad as he and the medical staff aim to have him ready in time for the team’s tour to India‚” said Cricket SA.

The Proteas will depart for India on Sunday where they will play matches in Dharamsala (March 12)‚ Lucknow (March 15) and Kolkata (March 18).

Australia will conclude their tour of SA at Potchefstroom’s Senwes Park on Saturday March 7.