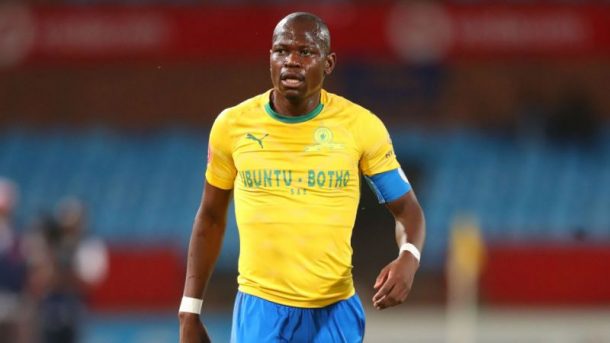 Mamelodi Sundowns captain Hlompho Kekana has issued a rallying call to his troops and urged them to take the fight to Kaizer Chiefs when the two sides meet in the hugely anticipated top of the table clash at Orlando Stadium on Thursday.

The race for the league title is heating up and the outcome of this encounter in Soweto could provide clarity on the destination of the championship.

A victory for Amakhosi would see them re-establish their pivotal six-point lead at the top while a win for the second-placed Sundowns would bring them level on the standings.

The Sundowns captain has made 23 league appearances for the Brazilians this season and chipped in with three goals and four assists.

He said the confidence has returned in the camp after their morale-boosting 1-0 win over Golden Arrows on Monday‚ which was their first victory in the bio-bubble after three draws and one loss.

“We are in the right frame of mind because we just won against Arrows‚ which was a huge morale-booster for us. I believe we stand a chance of doing the business for ourselves and the fans who have supported us through thick and thin.

“It was a breather to get all the points from Arrows because we tried for many games to win when football resumed in the bubble and it was difficult.

“We are in a very good space at the moment‚ we managed to get the three points that we were looking for as a team and the boys know that we can go again and win the next match. We have a chance to continue to serve the team and make sure that we win the other matches that are remaining in the campaign.”

Before their win against Arrow‚ Sundowns drew with Orlando Pirates‚ Highlands Park‚ Maritzburg United and lost to Cape Town City.

Kekana said they have finally adapted to playing football in the bubble.

“I think we now understand the nature of this game and I believe that we are a team that is very ambitious because we have been in this space for a long time.

“We understand that we have to take each game as it comes and one of the games that we must take care of is the one coming against Chiefs. We have adapted very well because we have been here in the bubble for three weeks now.

“The situation is not friendly for anybody but as professionals we know that we have a responsibility to serve football lovers. We are here and we have sacrificed a lot with the knowledge that there is a lot that we have to offer on the field of play.

“I am happy to see that the boys are also adapting to the situation and they are pulling their socks at training and during matches.”

Coach Pitso Mosimane welcomes back midfielder Andile Jali but he will have to do without defender Ricardo Nascimento who is suspended.