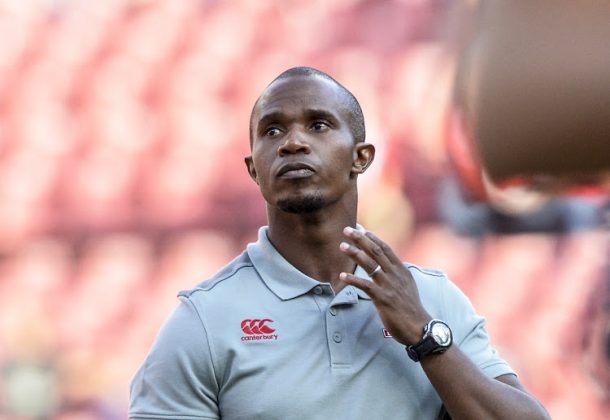 Bulls defence coach Joey Mongalo has been so engrossed in his studies that he’s had very little time to sit back and savour his Loftus ‘homecoming’ as part of Jake White’s revival at the Pretoria side.

Mongalo‚ who was recently announced as a member of White’s senior coaching staff‚ is busy with assignments for his Masters in Industrial Psychology at the University of Pretoria and the deadlines are approaching.

“To be honest‚ I haven’t had time to digest this because I am busy with my Masters in Industrial Psychology Tuks and I have been busy with assignments‚” said the 35-year-old former Pretoria Boys High School (PBHS) student.

“My last assignment is due very soon and I think once I have submitted that one‚ I will sit down and let the emotions and feelings settle down.

“Without going in deep with the feelings and emotions‚ I think there is a certain level of gratitude for the opportunity that has been given to me. There is a sense of coming back home having lived in Pretoria for a very long time and (being) introduced to professional rugby at Loftus.

“There is that coming back home feeling about it that is very comforting and it is good to see that a lot of people that were there while I was a player are still working there. So‚ seeing those faces again will bring back a lot of good memories‚” said Mongalo who left Loftus more than ten years ago.

Mongalo‚ who earned cult status at PBHS for scoring all the 18 points when they defeated traditional rivals Afrikaanse Hoër Seunskool (Affies) for the first time in 18 years in 2003‚ rejoins from the Lions where he learned the ropes as a coach.

“I can’t quantify the amount that I learned at the Lions where I coached at very level of coaching in the South African system from U19‚ U21‚ Vodacom Cup‚ Varsity Shield‚ Varsity Cup‚ Currie Cup and Super Rugby.

“The learning was immense from 2011 when I have never coached before to 2018 where I coached in the Super Rugby final. Everything that I have learned from coaching‚ 99 percent of it happened at the Lions.”

Mongalo added that he chose to study Industrial Psychology because there is a lot of synergy between technology‚ the corporate world and sport.

“I went into Industrial Psychology because I thought there is a lot of synergy between technology‚ the corporate world and the sport environment. For an example‚ the way we do leadership in rugby is something that the corporate world can benefit from sport.

Looking back to his feat of helping PHBS to beat Affies‚ Mongalo said it was a fond memory that will be with him for the rest of his life.

“I still remember that game very well because Affies were always beating us‚ so to contribute in defeating them at our school was very special. Pierre Spies was their captain and he went on to leave a legacy at the Bulls‚ and he was a phenomenal rugby player.

“I played junior rugby together with him (Spies) and I also played cricket against the likes of Faf du Plessis‚ Heino Kuhn‚ AB de Villiers. I remember in one game against Affies‚ De Villiers scored 196 not out in his last Matric game against us. It was very painful but at the same time a good learning experience.”