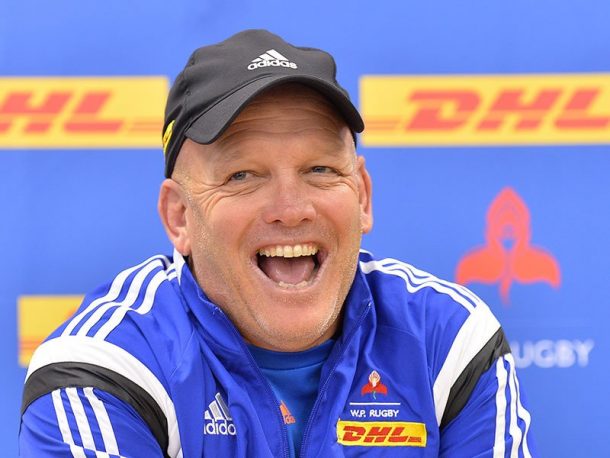 As expected Herschel Jantjies has dropped out of the Stormers’ starting team for Saturday’s Super Rugby clash against the Lions at Ellis Park.

In fact‚ Jantjies drops out of the team altogether as a result of a sternum injury after coach John Dobson initially intended playing the World Cup winning Springbok off the bench.

“We know in terms of SA Rugby protocol he can’t start every game. We have to build capacity‚” Dobson reminded.

Jantjies makes way for Godlen Masimla who gets his first start of the campaign. No 8 Juarno Augustus and tighthead Wilco Louw also crack the nod for the first time in the starting team in this campaign.

Augustus‚ a barrel chested gainline marauder will be a handful when he goes on the charge at Ellis Park‚ while Louw will who swap places with Frans Malherbe will bring a large amount of immovability to the Stormers scrum.

It is an area the Stormers are keen to deepen the Lions’ woes.

Augustus replaces Jaco Coetzee‚ while Johan du Toit moves from No 8 to flank where he will partner brother Pieter-Steph.

“He’s one of our top loose forwards. He’s got real X-factor. He plays similarly to Jaco Coetzee. When Jaco Coetzee got injured it was a no brainer‚” said Dobson about Augustus.

Like the Lions‚ the Stormers have again opted for a six-two split on their bench and much of the early exchanges are likely to be brutal.

Not to say it won’t be later in the game‚ as the Lions have included the hulking Willem Alberts on their bench.

Dobson believes the Stormers will have the man nicknamed ‘the bone collector’ covered.

“He’s obviously a great forward and a great Springbok but this competition takes you a few weeks to get into it. It will take some adaptation and I’m sure they’ll try and ease him to make a big impact.

“Coming off the bench he is also going to be met by Messrs (Frans) Malherbe‚ (JD) Schickerling and (Cobus) Wiese.

“I’m not too concerned‚” said Dobson.