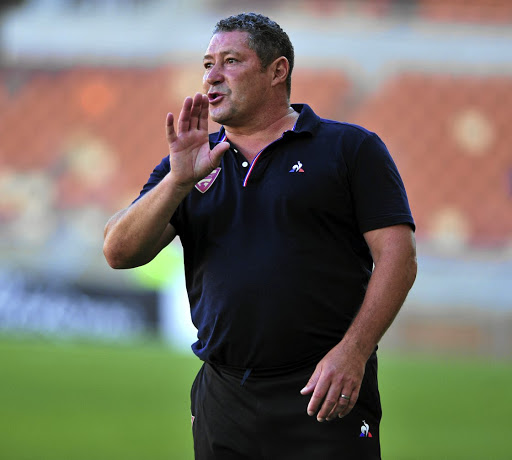 Steve Barker reveals what Stellenbosch need to do to win games

Stellenbosch FC coach Steve Barker was proud of the players’ efforts despite their 1-0 defeat to Maritzburg United at Danie Craven Stadium on Tuesday‚ but feels the team still need to improve on managing the game.

Barker said that Jayden Adams‚ Letelu Skelem and Ashley Du Preez‚ who played up-front‚ would learning from the experience that converting chances is crucial to attaining results in football.

“We dominated the game in the first half‚ I thought there was a one team really in the pitch‚” Barker said.

“They say in football if you don’t take your chances they’ll come back to bite you. We didn’t take our chances‚ we didn’t convert when we were on top.”

Stellenbosch have gone seven league matches without a win‚ having also been held 1-1 at home by Bloemfontein Celtic in their previous match on April 24‚ where they relied on an equalising goal from Junior Mendieta to come back into the game.

The Maroons have claimed 11 points from 12 home matches this season‚ with their last home win coming against Tshakhuma Tsha Madzivhandila in January.

“The first half I thought we were really tremendous and played with lot of energy stretch United and put them on the back foot. In the second half they changed their formation and to two blocks of four‚” Barker said.

“As the game went on I felt we were getting back on top and in the last 15 minutes we created chances again to get a goal.

“I thought we had a penalty‚ and I’m told it wasn’t but there’s nothing much I can do about that right now. We just have got to believe in what we are doing and keep on working.

“Obviously our biggest challenge is just to be calmer in the final third and a bit more composed and have more quality to take our chances‚ and then we will win lot more.”

In injury time‚ referee Abongile Tom awarded Maritzburg a dubious penalty after blowing up a player whose hands were behind his back in goalmouth frenzy. United striker Thabiso Kutumela made no mistake to earn three valuable points for the visitors.