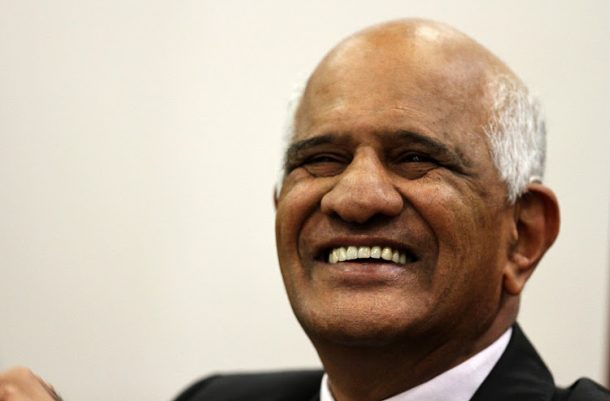 Sports minister Nathi Mthethwa has told the Cricket South Africa interim board that its chairperson justice Zak Yacoob must go.

The minister met with the board on Wednesday afternoon and communicated his desire for the retired to step down from his position after bringing Cricket SA into disrepute.

Mthethwa was stunned after he read the Sunday Times and then listened on TimesLIVE to the volley of insults that the retired judge of the Constitutional Court fired at Arena Holdings journalist Tiisetso Malepa during a heated interview.

The minister was also not happy with the way the justice dealt with suspended acting CSA acting CEO Kugandrie Govender.

“I met with the judge [Yacoob] and I expressed to him my disappointment with how he conducted himself. I also informed that him he will have to go‚” Mthethwa said to TimesLIVE.

“Later on when I met with the board‚ I made it clear to them that there must be circumspect and [they must be] respectful when dealing with the media. I also informed them that with Yacoob stepping down‚ in his stead Dr Stavros Nicolaou will be the chairperson.

Nicolaou will serve as acting chairman until the end of the interim board’s term of office on February 15.

Suspended CSA CEO Govender alleged that she was verbally harassed by Yacoob.

A disciplinary hearing against Govender is set for January 28 after her suspension last month on three counts of alleged misconduct.

In two letters of grievance‚ seen by TimesLIVE‚ that she wrote on December 2 and 3 last year to the CSA members’ council‚ Govender claims she was treated unfairly by Yacoob‚ who is a retired judge of the Constitutional Court.

This allegedly included an impromptu vote of no confidence in her as acting CEO. When the vote was not resolved‚ Yacoob allegedly offered her R5‚000 of his own money to seek legal counsel.

Yacoob reacted angrily in a telephone discussion with TimesLIVE. He said: “You are a dishonest‚ irresponsible idiot. You are a rogue and dirty journalist. I prefer not to answer your questions and to air my views when the enquiry comes up [on January 28].

“I do not respect you and I think I will not respond to your idiocy. You may print that in your newspaper if you so wish.”

CSA interim board spokesperson Judith February said in a one-line response to questions submitted by TimesLIVE that “the information contained in your message [questions] is wholly inaccurate”.

“Ms Govender’s hearing will proceed on January 28 and that will be the appropriate forum for adjudication‚” she said.

Govender says she wrote an e-mail to Yacoob on November 8 last year to highlight how‚ in her view‚ interim board member and former CSA CEO Haroon Lorgat may have contravened CSA media policy by giving an interview to an international publication without following prescribed procedures.

The next day‚ she was summoned to a meeting through Lorgat. “I called the interim chair [Yacoob] to explain that I was not available for that time and he became very aggressive with me‚ accusing me of having someone else write the e-mail‚ and of factionalism‚” Govender wrote in her first letter of grievance‚ dated December 2.

Govender claims Yacoob allegedly then said her seven-line e-mail had made him “very angry” as there were “at least 25 mistakes in it”‚ and that the conversation could be off the record‚ for her benefit.

At a subsequent meeting on November 28‚ Govender alleges she was humiliated by Yacoob over the content of the e-mail‚ including her word usage and punctuation.

After two hours of this meeting‚ she says‚ fellow interim board directors Prof Andre Odendaal‚ Xolani Vonya and Nkeko Mampuru said they felt she was not being treated fairly.

However‚ Yacoob allegedly disagreed. Govender described the experience as similar to being “alone in a courtroom standing before an annoyed judge who is about to hand down a final verdict for an unforgivable crime”.

On December 3‚ Govender wrote a second grievance letter after another interaction with Yacoob and the interim board‚ at a meeting where‚ she claims‚ she was berated for failing to respond to a question sent via e-mail by an interim board member the day before – which had also been the start of England’s tour to SA and therefore a day filled with challenges.

“I was rebuked for being a CEO that ‘inspires no confidence if I could miss an e-mail’‚” and this rebuke was followed by the impromptu vote of no confidence in her‚ Govender alleges.

However‚ the meeting moved on without the vote being concluded‚ and “I declined the chair’s personal contribution of R5‚000 towards legal fees for me to engage a lawyer to advise me … I was clear that the former CSA board had appointed me and I would step down on the order of the interim board and return to my chief commercial officer position‚ if so instructed.”

On Wednesday this week‚ Yacoob declined to answer any questions until Govender’s letters of grievance were shared with him.

“Why do I owe you an explanation?” he asked. “Who the hell are you? Will you print my remarks that I said that‚ in my view‚ you are an irresponsible journalist and I do not owe you any explanation?

“Will you please ask the person [Govender] who wrote those letters why they were offered that money? You go and do your own dirty work.

“You just pick up things. You pick a letter here and letter there and you snoop around all over the place. This is not my idea of a responsible journalist. You may think that you are highly responsible because your morality may be dented somewhat‚ but that is your problem.

“You are the only journalist whom I have trouble with at the moment. I have never seen such dishonesty and implied nonsense in my life before. Firstly‚ why do you even believe that she [Govender] is talking the truth?

“What does she say I offered the R5‚000 for? To hell with you! You have no right to ask me those questions in that idiotic fashion. You media people must not think you are bloody clever.

“All people who are fired‚ or who are suspended‚ make all kinds of allegations. So you go and check why I offered her the R5‚000 and you check what the story is.”

Interim board members Odendaal and Mampuru both said they could not answer questions when asked to corroborate the contents of Govender’s grievance letters.