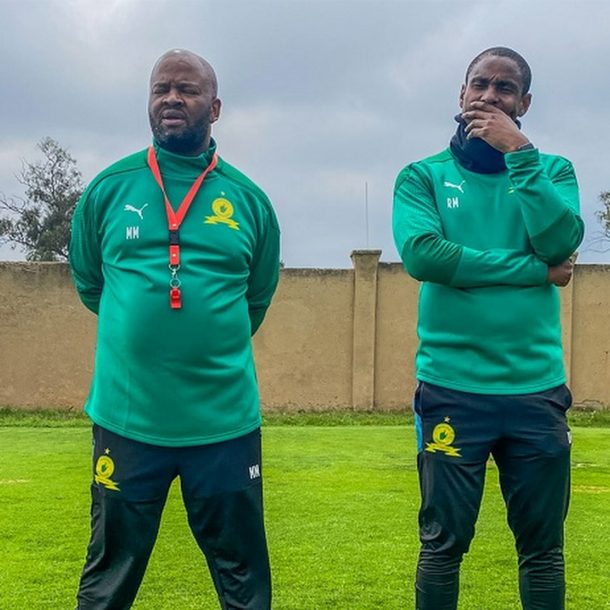 Sombre Sundowns reeling ahead of tricky date with Chippa: ‘We have not felt like this in a very long time’

Mamelodi Sundowns have become so accustomed to winning that they have still not come to terms with the defeat they suffered in their last match a few days ago.

The Brazilians are still reeling after their unexpected 0-2 defeat to CR Belouizdad in the Caf Champions League at Loftus on Friday as the determined Algerians ended their 28-match unbeaten run in all competitions. The result will have motivated Chippa United to attempt a shock of their own as they face the shell-shocked premiership champions next in a domestic league match on Monday afternoon.

Sundowns coach Rulani Mokwena conceded on Sunday that they are yet to wrap their heads around the surprise defeat and need to get over it very quickly as Chippa will happily take advantage of the situation if they allow the setback to continue to paralyse them.

“Ja‚ we face Chippa United on the back of a defeat [to CR Belouizdad]‚” he said.

“We have not felt like this in a very long time and the mood [in the camp] is extremely sombre. There is of course a feeling of unhappiness in and around the work space.

“That is what you have got to do‚ we have got to arrest the situation and feel the pain. The pain is good because it drives you to not be in that space again. So we try to work and focus on the next one.”

Mokwena said the coaching changes at Chippa in the last couple of days would make planning for the tumultuous Eastern Cape side very difficult.

Chippa went through incredible turmoil in their technical department last week after controversial Belgian Luc Eymael was brought in and then later released due to public and political pressure just days after club owner Siviwe Mpengesi appointed him to the club.

The upheaval began when Mpengesi fired coach Dan Malesela after an embarrassing 1-5 league defeat to Maritzburg United last week. Eymael was appointed as the club’s “technical adviser” a day after Malesela’s sacking‚ with Zwide-born coach Siyabulela Gwambi assuming the head coaching job on an interim basis.

Eymael remains a hugely controversial figure among fans‚ media‚ politicians and even other coaches in SA after the Belgian was fired with immediate effect by Tanzania Premier League side Yanga Africans in July last year for calling the club’s fans “illiterate” and “monkeys”.

After the Economic Freedom Fighters (EFF) in the Eastern Cape got involved and slammed Mpengesi’s decision to appoint Eymael to his side’s technical team‚ the Chippa owner finally caved under the enormous pressure and released him.

Mokwena said they were having a difficult time trying to figure out Gwambi’s tactics‚ and the kind of reception he has in store for the Pretoria side.

“But the reality is we still have a responsibility to do our work‚ we have to do our work and we cannot complain. We still have to watch Chippa vs Pirates‚ Chippa vs Cape Town City‚ Chippa vs Richards Bay [in the Nedbank Cup] and Chippa vs AmaZulu‚ and make sure that we are ready‚ and we watch their game against Maritzburg.

“We have been very extensive because you know that when you have lost a game‚ you are driven to dig even deeper and make sure you leave no stone unturned. That is where we are with regards to Chippa.”

The match will be played at Sisa Dukashe stadium and kick off is at 3pm.