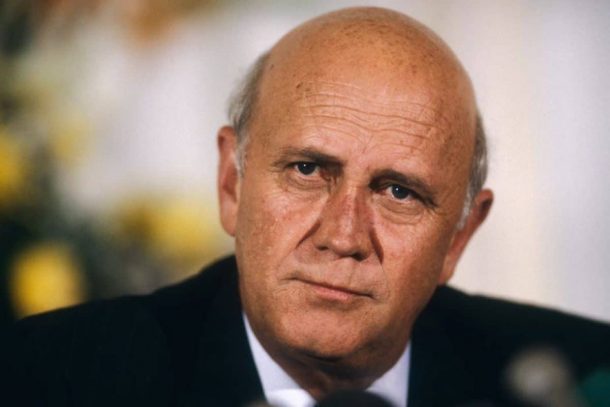 De Klerk died last Thursday at his home in Cape Town at the age of 85. His death was confirmed in a statement by his foundation.

Considered the last white ruler of SA‚ De Klerk shared the Nobel Peace Prize in 1993 with Nelson Mandela “for their work for the peaceful termination of the apartheid regime‚ and for laying the foundations for a new democratic SA”.

As a mark of respect for De Klerk‚ Ramaphosa declared that the national flag would be flown at half-mast from sunset on Wednesday until the evening of November 21.

Acting presidency spokesperson Tyrone Seale said a state memorial service will be announced by government at a later stage.

“Government has consulted the De Klerk family and FW de Klerk Foundation as part of preparing for this event in which government leaders‚ leaders of political parties and representatives of civil society will participate‚” said Seale.

De Klerk’s legacy has been the subject of fierce debate on social media after his death‚ with many suggesting they would disrupt a state funeral or memorial service if it was held in his honour.

Controversial former ANC staffer Carl Niehaus was among those who weighed in on the decision‚ saying Ramaphosa should be ashamed of himself for making such an announcement.

“Cyril Ramaphosa‚ are you serious? This is a sick joke‚” he wrote‚ adding that he would “not in a million years mourn De Klerk for one second.”