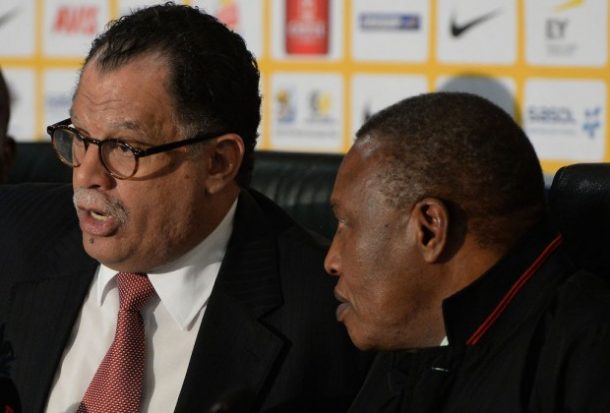 Safa and PSL headed for a conflict over coronavirus?

The Premier Soccer League’s Board of Governors meet in Johannesburg on Thursday to take a decision on the immediate future of professional soccer in the country‚ facing some compelling decisions while coming under conflicting pressures at a time of unprecedented crisis over the coronavirus health scare.

There is a growing sentiment among club owners‚ many of whom have spoken to TimesLIVE on condition of anonymity‚ to get the league restarted behind closed doors next week‚ fuelled by a nod of approval on Tuesday from Sports Minister Nathi Mthethwa.

But any such decision run the risk of a damaging public backlash and also head-to-head confrontation with the South African Football Association (Safa)‚ who look determined to claim the moral high ground and drive the immediate agenda.

Safa have scheduled a briefing on Wednesday at which they will either reiterate their position on supending all football in the country‚ or might even take that decision themselves as the mother body.

That would be a direct challenge to the PSL‚ opening another chapter in the ages-old fight for ultimate authority of the game in SA.

While the PSL is an affiliate of SAFA‚ their financial muscle means they have challenged the association continually over the years and often emerged on top.

The PSL Board of Governors — who are effectively the 32 chairmen of the top two division clubs — will consider whether to resume behind close doors — taking the example of Turkey‚ the only major league left where football continues‚ albeit without spectators.

The PSL executive committee on Monday suspended football until after this weekend in response to the declaration of a ‘state of disaster’ by President Cyril Ramaphosa‚ including the measure odf prohibiting gatherings of more than 100.

To play behind closed doors‚ The PSL would have to keep access down to below that number of people — which would be tough if the games are to be televised.

Ordinarily there are at least 30 to 40 people per football team at the match venue and television brings at least another 50 staff to the venue‚ plus PSL officials and written and radio media‚ seemingly taking it above the 100-person limit.

A resumption would also mean clubs would need to travel – going against Ramaphosa’s directive against non-essential travel.

It could provoke a public relations catastrophe for the league and its clubs‚ who would be seen to be putting self-interest ahead of the greater public good at a time when containment and self-isolation are seen as the best weapons in the fight against the virus.

Another factor against a resumption behind closed doors is the growing number of players who infected through contact on the field‚ notably from Spanish club Valencia after they travelled to Italy in the Champions League earlier this month.

“As we speak‚ they can have their match tomorrow with no spectators‚” the minister said.

“But there is an obligation on them to follow to the letter the health and hygiene protocols as outlined by the department of health.”

Mthethwa’s comment were quickly slammed by Safa‚ who tweeted (https://twitter.com/SAFA_net) soon thereafter: “Safa’s position remains unchanged and that is all matches (from amateur level to PSL) must be postponed until further notice.”

Safa have previously shut down Mthethwa’s attempts to organise a soccer indaba‚ causing embarrassment to the minister‚ making him look powerless but also highlighting his lack of understanding of the dynamics of the game.

The PSL BoG could also decide to postpone any drastic decisions and wait a little longer‚ keeping the league suspended for a few more weeks.

There is no immediate pressure to make a finite call about the outcome of the season.

They still have time to play with‚ as they can extend the league season from its current mid-May conclusion right through until the end of June‚ as has now been done in Europe by moving the postponing the 2020 European Championship to 2021.

They could reconvene in a few weeks where if the situation has not changed they would then have to decide on how to proceed.