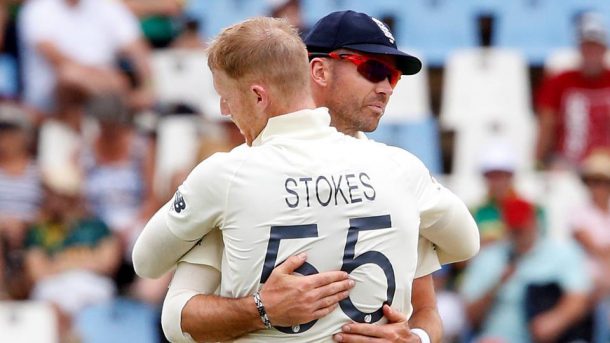 Alvin Reeves in Port Elizabeth – South Africa were up against the ropes and staring defeat square in the face after the fourth day’s play in the Third Test against England at St George’s Park on Sunday.

Around two-and-a-half hours of play were lost on Sunday but there was still enough time for England to wreak havoc on the brittle home team batting line-up.

After being rolled early on Sunday morning for a dismal 209 in their first innings‚ the Proteas were teetering on the edge on an even more embarrassing 102 for six in their follow-on innings still 188 behind England’s 499.

Vernon Philander (8) and Keshav Maharaj (5) were left carrying the slim hopes of SA fans when stumps were drawn.

It was another disastrous day of batting for home team and there is very little chance of them surviving the final day on Monday.

There is more rain in the forecast for day five but there is likely to be time enough for England to claim the last four wickets to go 2-1 in the series with only the Wanderers Test to come.

SA’s first innings nightwatchman Anrich Nortje spoke passionately after play on Saturday about displaying some real fight in trying to save the Test.

Having demonstrated how to value your wicket duing his three-hour vigil‚ his team-mates cocked him a deaf one on Sunday morning as they captiluated meekly‚ tossing their last four wickets in 28 balls for the addition of only one run to end on 209.

They were asked to follow-on by England skipper Joe Root and reached 15 without loss before rain halted play about an hour before lunch.

It took seven balls for England to strike after the resumption as Dean Elgar played across a delivery from an impressive Mark Wood to be bowled for 15.

Only four overs after that Hamza (2) flicked at ball down the legside from Wood and found an edge through to wicketkeeper Jos Buttler.

It was second time Hamza was out in that manner in the series after Stuart Broad induced him into playing the same stroke in Centurion in the first Test.

Enter Root into the attack and his offspin was immediately successful‚ as he trapped Pieter Malan leg before wicket in his first over.

After tea‚ Root was back in the action when Ollie Pope held on to a spectacular diving catch at short-leg off the bat of Rassie van der Dussen‚ who looked all at sea against the turning ball.

SA were in danger of collapsing like a cheap deck chair at a garage sale as captain Faf du Plessis stood looking on from the other end.

Quinton de Kock came and went for only three as Root forced him into playing a shot he would rather forget.

And then it was Du Plessis’s turn to trudge back as he bat-padded to Pope off Root who finished the day with four for 31.

Du Plessis made 36 in 144 minutes and it was his highest score in eight innings but that will do little to release the pressure of not scoring runs that he is under.