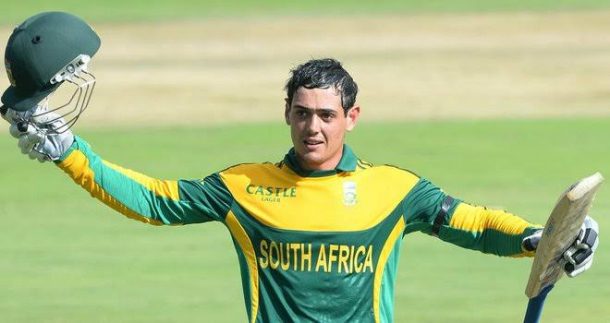 Proteas limited overs skipper Quinton de Kock doesn’t seem to be hung up over the events of that fractitious 2018 Australia tour‚ nor does he sound keen to open up those old wounds when SA and the visitors meet in the first of three T20I’s at the Wanderers on Friday.

De Kock had a flashpoint moment with then Australian vice-captain David Warner in the tunnel at Kingsmead during the first Test of the 2018 series.

That moment soured an already dramatic series that had its controversial high-water mark with the ball-tampering matter that temporarily halted the careers of Warner and his then captain Steve Smith.

Both should be in Australia’s playing eleven on Friday‚ but De Kock was more focused on cricket than other hostilities.

“We haven’t had any conversation and I think we’ve moved on from that anyway. We just look to play cricket and just love to play the game really hard‚” De Kock said.

“I don’t think anything will happen and we’ll just carry on with the way we need to go about things. We won’t worry too much.”

The game will also be Faf du Plessis’s first limited overs outing for the national team since the ill-fated 2019 Cricket World Cup.

Du Plessis scored the last of his 12 ODI’s tons against Australia in Manchester last year and his previous T20I was against Sri Lanka in Cape Town in March last year.

De Kock was happy to have him back and knows Du Plessis won’t have an issue being part of the team rank-and-file.

“It’s great to have him back and he’s excited about going forward. He still understands the massive role he has to play in the team.

“He’s still seen as a leader among us and he’s one of the senior players in the team‚” De Kock said.

“He’s still got a lot to offer and he’s excited to be playing again.”

With Temba Bavuma missing Friday’s game‚ De Kock smartly sidestepped the issue of who’ll be partnering him at the top of the order.

He also deftly but understandably moved away from the make-up of the starting 11 as Johannesburg’s rather unpredictable weather hasn’t quite allowed for straight-forward selections.

“We have chatted about one or two options‚ but I can’t say. However‚ we are open-minded about the options we have. We have an idea of who’s going to open on Friday‚” De Kock said.

“We’re going to play our best team for the situation we have out there. It’s a horses for courses type of thinking.