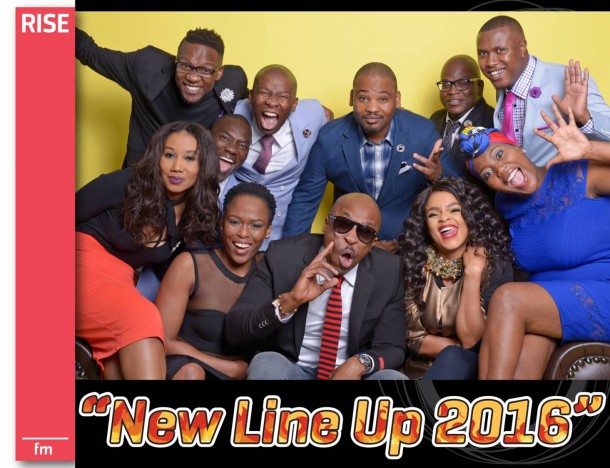 Mpumalanga’s Hottest Radio Station RISE fm revealed their new 2016 Line Up at an entertaining event for clients and media at Kuzuri Restaurant on Tuesday evening.

Radio star, entrepreneur & youth icon Sbu Leope AKA DJ Sbu is set to get the province going each weekday morning from 06h00-09h00 FROM July 4. DJ Sbu and Times Media Group revealed plans to return him to the airwaves last week with his DJ Sbu Breakfast Show, a network show to be broadcast on both RISE fm and sister station Vuma 103 fm in KwaZulu Natal

The gravel voiced media personality will be followed by exceptional home grown talent Kede Mkhabela from 09h00-12h00. Kede returns to the province after spending many a year in Gauteng pursuing a successful career in both TV and Radio.

RISE fm’s popular weekend presenter Given Take moves to the weekday line up from 12h00 to 15h00 and will be followed by experienced Makhosi Khoza who hosts the RISE fm Drive Home each weekday.

Nomfundo Sibanyoni continues to host RISE fm’s ever so popular current affairs show ‘RISE in Sixty Minutes’ every Mon-Thurs 18h00-19h00 and listener favourite JT keeps the momentum going into the evenings as host from 19h00-22h00.

In between all the announcements, some great entertainment was provided by talented Mpumalanga artist Jay Spitter.

RISE fm Station Manager Ferdinand Mabalane expanded on the reasons and motivation behind the repositioning of the Line Up and said “The addition of DJ Sbu to the RISE fm lineup is the most significant statement ever made since the birth of RISE fm, to declare our intention to be a regional powerhouse, with a national and continental presence, putting Mpumalanga on par with other major radio stations in the country and Africa. The overall lineup change will assert the station’s competitiveness to draw in Mpumalanga’s critical listenership market which will in turn encourage more and more advertisers to use RISE fm as an effective and credible vehicle through which they can expose their products and services”

“It’s a dream come true for me to be a part of this family. It’s a beautiful challenge and I’m proud, humbled, honored at the same time but most importantly I’m up for the job! “ said the elated DJ Sbu.

The brand new line up becomes effective this July with the DJ Sbu Breakfast officially launching on the 4th.