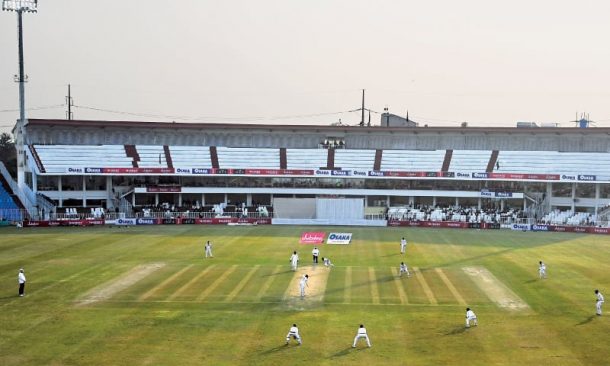 South Africa coach Mark Boucher has admitted that they do not know much about the pitch at Rawalpindi Cricket Stadium and how it will play when they face Pakistan in the second and final Test match on Thursday.

The Proteas go into the match trailing 1-0 after they were mesmerised by the wizardry of Yasir Shah and Nauman Ali‚ who claimed 14 of the South African 20 wickets in the first match in Karachi.

The Rawalpindi Cricket Stadium is known to be usually seamer-friendly‚ but Boucher said the curators removed the grass they saw earlier this week and the wicket now looks very dry.

“If you look at the history of this ground‚ you will probably say it’s more seamer-friendly and that’s what we have been reading and looking at in the past results as well‚” said Boucher.

“When we first got here three days ago‚ there was quite a bit of grass on the wicket. And when we got there [on Tuesday]‚ all that grass had been taken off and the surface looks to be very dry.”

Boucher said they have spoken to Pakistan players and staff members and they also don’t know what to expect from the pitch.

“[From] just chatting around the ground to a couple of Pakistan players and the staff members‚ they don’t seem to be too sure how the pitch is actually going to play.

“There has been a lot of talk in the media about how they want to dry the wicket out‚ obviously because of the spinning conditions and the way we sort of played in Karachi as well.

“It an interesting one‚ I don’t think anyone really knows how it’s going to play. There’s a lot of plates on the wickets‚ it is certainly very dry and there is not much grass.

“Much grass was cut off two days ago and there is moisture around‚ there is dew early morning and we are probably not going to get a full day of play in because it gets dark earlier.

“We will have to wait and see‚ but it’s an interesting one. If the Pakistan guys are not too sure on how it’s going to play‚ it’s quite difficult for us to make a call. We are probably going to have to cover all angles.”

Turning to team news‚ Boucher said opener Dean Elgar is good to go after he was hit by a ball on the hand in Karachi. But a late call will be made on Thursday morning with regards to spinner Keshav Maharaj.

“Dean seems to be fine.

“He batted [on Tuesday] with an injection and said he couldn’t feel anything‚ and he batted again [on Wednesday].

“As far as we are concerned‚ he is good to go.

“In terms of Keshav‚ he turned around and he felt something in his rib area during Tuesday’s training session. He went to the doctor and scans showed that there was something there that might be a bruising of some sorts‚ but he bowled close to 15 overs [on Wednesda] just to test himself.

“He felt fine but we are not ready to make a call on him yet because we don’t know how the body will react overnight. He needs to give us an early call on how he feels.

“I am going to have to trust Kesh on this one.

“If he wakes up in the morning feeling great‚ then he will get the nod.”