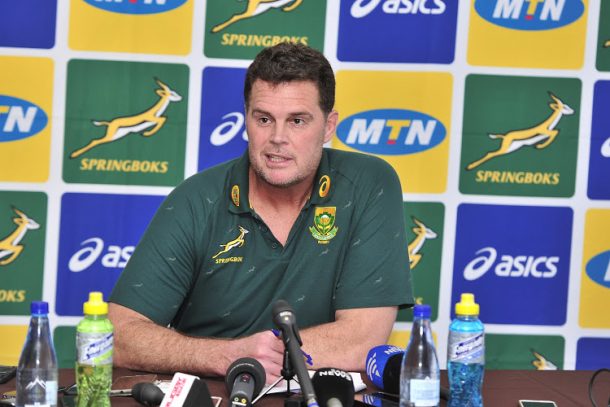 Rassie back for his ‘normal role’ on Springbok tour

Rassie Erasmus‚ SA Rugby’s director of rugby‚ will resume his “normal role” on the Springboks’ end of year tour‚ according to coach Jacques Nienaber.

Erasmus‚ who did not travel with the team to Australia for the Rugby Championship‚ will tour Wales‚ Scotland and England‚ though he and SA Rugby have to face World Rugby on misconduct charges at the end of the month.

Erasmus and SA Rugby were formally charged by the world governing body after Erasmus produced an hour-long video criticising match officials after the Springboks’ 22-17 defeat in the first Test against the British and Irish Lions in July.

The Springboks will spend a week in France before travelling to Cardiff on October 31.

Nienaber confirmed Erasmus would be resuming his normal duties but did not specify whether he will join the squad before or after the hearing.

Depending on the outcome of the hearing‚ Erasmus could‚ among other things‚ resume the water boy duties he performed much to the chagrin of Lions coach Warren Gatland during the Lions’ series. Coaches are not supposed to perform water carrying duties but Erasmus isn’t officially part of the Springboks’ coaching group.

While Erasmus will travel north the same is not the case for Morne Steyn‚ who has quit playing Test rugby.

Nienaber paid tribute to the player who secured the series win against the Lions earlier this year‚ much in the same way he did back in 2009.

“What can you say about Morne?” said Nienaber about the 37-year-old. “He has been such a great servant to South African rugby and he is a brilliant rugby player.”

“First‚ hats off to him because of what he has delivered on the rugby field. Just the little bit of magic that he created in terms of the contest with the British and Irish Lions‚ beating them twice in the specific manner that he did. It just speaks volumes of the guy on the rugby field.

“Off the rugby field‚ he was phenomenal. Working with him in these past 20 weeks he always contributed‚ always helped paint the big picture‚ always helped prepare the team. He was never scared to give his wisdom over to the younger players. There are volumes that I can talk regarding him.”

Nienaber confirmed Steyn quit to spend more time with his family‚ adding that had the flyhalf been available they would have had a specific role for him at the 2023 RWC.

“We wouldn’t have put him in the Lions and Rugby Championship groups if we didn’t feel there was a role for him to play up to 2023‚” said Nienaber.

“Morne’s rugby IQ is so high and his intellectual capital vast. He was always eager share his insights. We respect his decision and wish him well‚ and as I said‚ what a fantastic guy‚ not just a fantastic rugby player‚ but a fantastic guy off the field and as a person‚” said Nienaber.