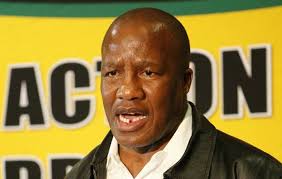 ‘Ramaphosa should be next ANC president, case closed’: Jackson Mthembu

This is according to the ruling party’s chief whip in Parliament Jackson Mthembu who reportedly threw his weight behind Ramaphosa.
In an exclusive interview with Bloomberg, Mthembu said ‘that it is common knowledge that a deputy naturally becomes the president’.
Ramaphosa is in the race for the ANC leadership with the former Africa Union Commission chairperson and President Zuma’s ex-wife Nkosazana Dlamini-Zuma and ANC chairperson Baleka Mbete.
Although Dlamini-Zuma has not officially declared her interest in leading the ANC, she said that African countries should be encouraged to not overlook women when considering presidents.
“We want in Africa, that we should have women presidents. At the moment we have one from Liberia, her two-term ends in October this year which will mean we go back where only men are leading. We encourage African countries to also consider women to become presidents so that it’s mixed,” said Dlamini-Zuma.
President Jacob Zuma has also said that the ANC has been ready for a woman president.
“It is no longer a discussion in the ANC whether a woman can take a high leadership position or not. This discussion has been had before and the party agreed that anyone who is seen to have the qualities to lead the movement‚ there won’t be any problem for that person to do so‚” Zuma said.
Meanwhile opposition leader Julius Malema told reporters last week during a press conference that Ramaphosa should give up an hopes of leading the ANC as he did not have enough support from the party branches.