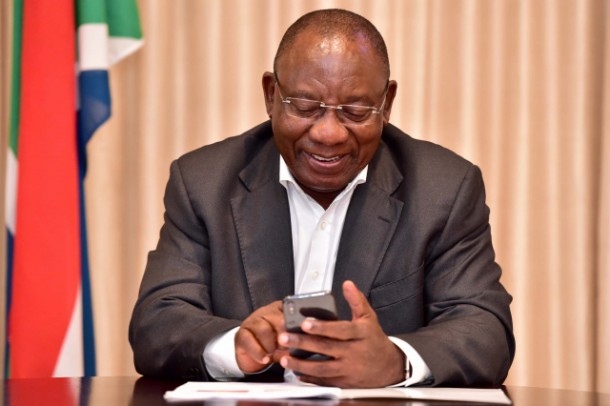 It was in 1992 that the late former president Nelson Mandela had an honorary doctorate conferred on him by the University Cheikh Anta Diop in Dakar‚ Senegal.

Almost 30 years later‚ President Cyril Ramaphosa received the same honour on Monday evening at the same university‚ something he says “is the greatest honour”.

“I have over the years in my career been handed a number of honorary doctorates and I can say with the utmost conviction‚ that this one from the Cheikh Anta Diop University gives me the greatest treasure of all‚” said Ramaphosa.

Ramaphosa was speaking at the university shortly after being honoured.

He told the audience that his visit comes at the end of successful state visits to Nigeria‚ Ivory Coast and Ghana where deliberations included how West African countries can work together to build a better continent.

Ramaphosa said: “I accept this honour on behalf of people of SA‚ who have entrusted me with the responsibility of being their president.”

He said he was mindful that “I am standing on the shoulders of giants”.

“Twenty-nine years ago‚ this university recognised the founding father of our nation‚ President Nelson Mandela‚ with the same doctorate that I am receiving today. What an honour for me to receive exactly what he received.”

In accepting the doctorate Ramaphosa said Mandela made a commitment to the university and to the people of Senegal. “We promised that we would uphold the banner of freedom‚ truth‚ human dignity and integrity.”

He said in 1992‚ Mandela visited the same university‚ “from a SA where our people were still in bondage and chains under the jackboot of apartheid”.

Today‚ he said‚ he was visiting the university as president of a free SA where everyone enjoyed the protection of a constitution and a bill of rights that Mandela led.

https://twitter.com/MandaKhoza/status/1467924960727506954
“In less than a week from now‚ we will be celebrating 25 years since President Mandela signed our constitution into law. I vividly remember that day in Sharpeville — where the apartheid regime killed more than 70 innocent people who were running — and we decided that is the place where we would have him sign the constitution.

“Indeed I remember that day because after he signed the constitution‚ we held that constitution and said that was the next certificate of a democratic SA.

“We have made good on the promise that he made there. SA is a vastly different place than what it was in 1992. SA has changed for the better. Our society is rooted in human rights and fundamental freedoms‚” Ramaphosa told the audience.

Today‚ he said‚ all South Africans had basic human rights‚ including being able to vote‚ which was formerly reserved only for white people.

“Our people participated in the national life of their country and we have just held another round of successful‚ free and fair elections‚ meaning that democracy has really found a home in SA and we continue to dig its roots deeper into the hearts of the people of SA.”

https://twitter.com/MandaKhoza/status/1467929923570524166
While some gains have been made towards making SA a better country‚ Ramaphosa said: “We know that significant challenges remain. We know that SA continues to be an unequal society‚ poverty continues to stalk our people and unemployment is at a high level.

“In Senegal and SA‚ the spectre of underdevelopment looms large and the [Covid-19] pandemic has significantly eroded the gains we have made as a continent and pushed many people into unemployment and worse poverty.”

He said Africa has many challenges that are urgent and need to be addressed with great commitment. “They include slow economic growth‚ worsening unemployment — especially for young people — and rising social inequality‚ as well as conflict and instability in many parts of our continent.”

Climate change has also been made worse by Covid-19‚ he said.

“The role of the African university is to be of service to Africa‚ the people of our continent. For this to happen it must be socially embedded‚ working with and within our communities and our continent‚ and helping to advance national development.”

On Tuesday‚ Ramaphosa is expected to attend a state welcome ceremony‚ which will be preceded by signing agreements that include elevating the joint commission for bilateral co-operation from ministerial level to presidential level.