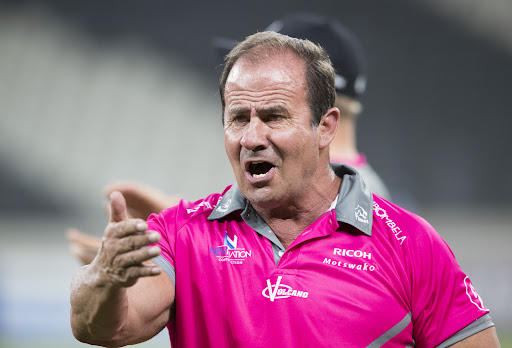 Pumas coach Jimmy Stonehouse has defended the Currie Cup as an important breeding ground for players in SA.

The tournament came under fire from Bulls coach Gert Smal. He was quoted as saying it has been devalued and belongs in a museum after they lost to the Griquas on Friday.

The Bulls’ defeat by the Griquas on Friday night at Loftus denied them passage to the final at the weekend‚ where they could have had an opportunity to defend their trophy.

The unlikeliest of Currie Cup finals will see Griquas take on the Pumas‚ who stunned the Cheetahs in the other semifinal on Saturday when they scored two late tries to secure a narrow 38-35 victory.

“This is actually a sad thing. I read in the media that Gert (Smal) said the Currie Cup belongs in a museum‚” said Stonehouse‚ who led the Pumas to their first Currie Cup final.

“If the Bulls would have won on Friday night against the Griquas then it is a great union. They have a great squad and they are in two finals. When they played in the previous games with a lot of URC guys‚ nobody complained.”

Stonehouse said the Griquas brought an exciting element to the tournament by giving opportunities to Varsity Cup players.

“What the Griquas brought to the Currie Cup this season is amazing. They brought a lot of Varsity Cup players. I can understand the Lions and all the teams who have to play in two competitions. But that Bulls team that played on Friday night against the Griquas cost more than the Griquas team.”

Stonehouse said the Griquas and Pumas make qualifying for the final the best thing for rugby in the country.

“Between Griquas and us (Pumas)‚ there is big rivalry brewing and this is one of the best things that could ever have happened for rugby in SA. We are losing 10 players at the end of the season and the Griquas are also losing players.

“But where are they going? They are going to the United Rugby Championship (URC) and you bred them here at the Currie Cup. If we also got R50m or R90m‚ we could buy that type of team.

“There are a lot of players in the bigger unions who don’t get a chance to play. Coming back to the Griquas and the Pumas‚ this is amazing‚ I think it is going to be great in Kimberley.”

Cheetahs coach Hawies Fourie could not hide his disappointment at failing to make the final.

“It is disappointing. We didn’t start well. We were 17-7 down in the first 20 minutes but I thought we played well in the middle and at some stage we were up by 15 points and in the semi-final you mustn’t lose a game if you were up by that margin.

“You must close the game down and we didn’t do that. Instead we made mistakes and conceded two penalties at the end of the game.

“We came back really well and then let it slip. It is difficult to know the way forward. It will definitely take time to get over this loss and not qualifying for the final at home but we will have to regroup‚ show character and prepare ourselves for the next two competitions.”