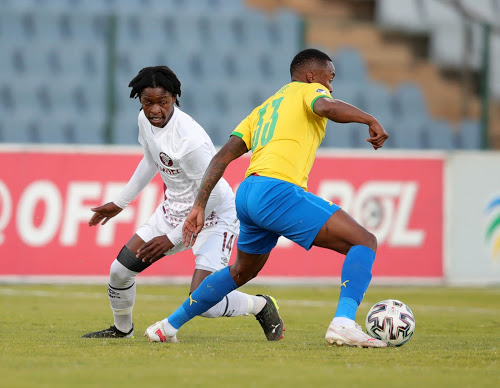 Swallows FC coach Brandon Truter paid tribute to his players after they showed glimpses of what they are capable of when they held recently crowned premiership champions Mamelodi Sundowns to a 1-1 draw at the Dobsonville Stadium on Saturday.

It was a 19th draw of the season for the Dube Birds‚ also their seventh in a row‚ but they will have been pleased to have taken points from the champions after also drawing the corresponding fixture earlier in the season.

Truter’s side kept their fifth position and they now look set for a comfortable finish inside the top eight in their first season back in the big time after five years in the wilderness.

“Good game‚ and I’m so immensely proud of the boys. We showed that we can compete with the best‚” a content Truter said.

“I mean Sundowns are champions four times in a row‚ and not for nothing. The depth of their squad‚ the quality in the park is there for everybody to see.

“But I’m so proud of my boys and actually‚ we showed what we can do. I think we’re on the right track and we want to build and get it right next season.

“Again‚ we created chances in the second half more than them. Definitely there was a penalty there on (Kagiso) Malinga that I felt we could have snatched (a win) at the end.

“But tactically we outplayed them and we managed‚ especially in the second half‚ to be better than them in the midfield.

“We managed to get into the space‚ get it wide and then delivered. But the final ball‚ the final decision and also Reyaad (Pieterse)… I have to give credit to him. He made a few good saves‚ but there was so many near misses and we could have snatched the three points.”

Truter was pleased to have snatched another point from the champions and said the bigger challenge is get his players ready for the last two matches of the season away to AmaZulu on Wednesday and at home against Baroka on Saturday.

“Ja‚ it’s another draw but it’s against the champions and we’re still the only unbeaten team at home since February [last year]‚” the Swallows coach boasted.

“So ja‚ two more games…… we’re away now to AmaZulu and it’s another big one‚ and then we come back to finish [the season] against Baroka [on the final day].

“For us‚ of course‚ the challenge is to get our best players on the park for AmaZulu in our next game.

“They [AmaZulu] will try to win to cement second spot‚ and so it’s going to be an interesting game. But for now I just need to give credit to the boys.

“It was an immense effort and they [the players] stuck to the plan well‚ and they showed they can compete with the big boys.”

Truter acknowledged their struggle with scoring goals and said the problem can only be fixed on the training pitch‚ though there’s little he can do this season as injuries and fatigue are starting to affect some of his charges.

“There’s not much time to address [lack of scoring] really‚” said Truter.

“We have to look at the fatigue‚ and we need to look at the knocks and niggles that come out of these games as well. Some of the midfielders ran their socks off [on Saturday]‚ so our first point will have to be recovery.

“Finishing has been a problem for us the whole season. Yes we scored also in most games this season as well‚ but the chances I felt we could have converted [on Saturday]is something to work on at training.

“But ja‚ I would have been more concerned if we didn’t create those chances. We’re creating at the moment and it’s a matter of putting it away.

“We’ll keep on working on the training pitch and that’s the only way we can get it right.”