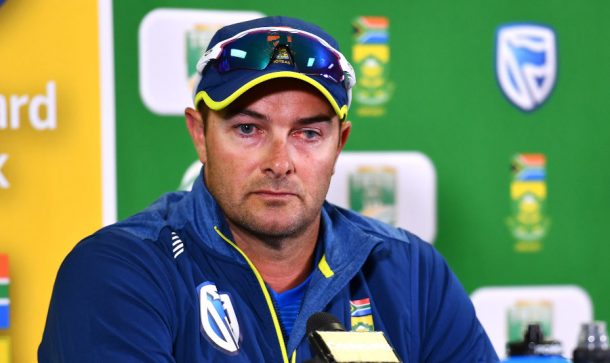 Proteas team director Mark Boucher is not convinced that the West Indies tour that is scheduled for the end of this month is going to take place.

The West Indies are currently engaged in a three-Test Wisden Trophy series against England‚ with the first Test taking place at the Rose Bowl in Southampton.

The third Test of that ongoing series starts on July 24 in Manchester‚ which is supposed to be the second day of the first Test between South Africa and the West Indies in Trinidad and Tobago.

As a non-contact sport‚ cricket has been granted a return to play and training dispensation by the department of sports‚ arts and culture under the Level three lockdown regulations.

The International Cricket Council still has to meet to decide how the rest of the Future Tours Programme will look with the Indian Premier League and the Men’s T20 World Cup still up in the air. Boucher said these decisions will impact on SA’s travels and India’s slated visit to these shores at the end of August.

“I don’t know if those tours are going to go ahead or they’ve been officially cancelled. It doesn’t look likely that we’ll be going ahead with those tours. Things are up in the air at the moment. We’re waiting for a couple of teams to get back to us and we’re also waiting for the ICC for the IPL announcement and all that kind of stuff‚” Boucher said.

“We’ve planned as much as we can‚ but we’ll have to roll with the punches and see when the ICC makes the announcements. The IPL is a big tournament and I think they may try to have it at the end of the year. Hopefully we can start working on that‚ but it doesn’t look likely that we’ll go to the West Indies.”

While most of the cricket focus will shift to Saturday’s 3Team Cricket tournament at SuperSport Park‚ TimesLive understands that training camps and inter-squad games are in the pipeline from a preparation perspective for the national team at a date that’ll be announced. A 45-man High Performance squad consisting of most franchise and international players was announced recently.

Some of those players will take part in Saturday’s match and Boucher admitting that most of the players won’t be firing at 100 percent.

Since the March shutdown‚ there hasn’t been any cricket‚ but Boucher has been impressed by the fitness levels shown by the players.

“We have to understand where we are now with regards to where the players are fitness wise. We haven’t had game time.

“There’s Saturday’s 3Team Cricket tournament for the Solidarity Cup‚ but I don’t expect our guys to be at 100 percent‚ even though there have been a couple of net sessions. If they’re at 80 percent‚ it’s understandable‚” Boucher said.

“The guys are looking good and very strong. It’s difficult to work on your fitness. I understand the guys can’t go to the gym‚ but they have been finding a way and we’ve been driving home that message.

“I’m very happy with where the guys are from a fitness perspective. Now that they’re also allowed to go to the nets‚ their enthusiasm has been great.”