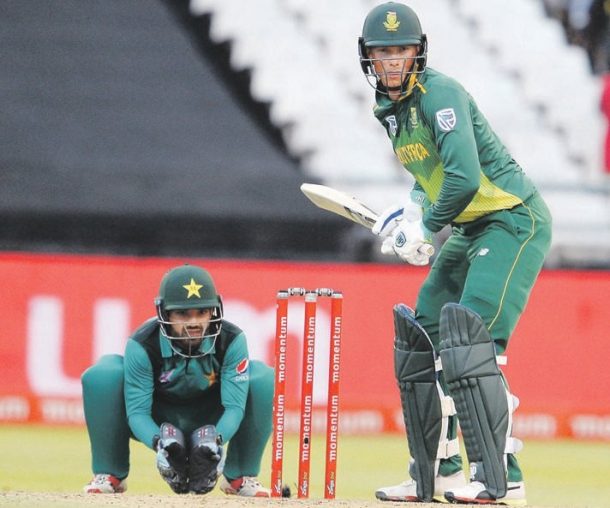 Hendrik “Rassie” van der Dussen has five half-centuries to his name in the 1000 balls he has faced in seven Test matches for the Proteas.

The Lions right-hander has crossed the 90 mark on three occasions‚ including a 138-ball 98 in just his fourth match against England‚ only to fall agonisingly short of raising his bat to the heavens to salute a Test hundred.

Van der Dussen looked set for his maiden Test hundred in the opening match against Pakistan last week but had to settle for a fifth half-century after he was undone by the spin of Yasir Shah.

The Tigers of Pakistan were at some stage cornered‚ limping at 27 for 4 in their reply to the Proteas paltry first innings score of 220‚ but clawed their way out as they fought back to win by seven wickets and take a 1-0 lead in the two-match series.

Van der Dussen admitted he often sits and wonders just when his first hundred will come ahead of the second and final Test in Rawalpindi starting from Thursday.

“It is something that I definitely think about‚ and I think I have thought about it probably my whole life‚” he said as he prepares for the tussle at the Pindi Cricket Stadium.

“I do think about it in a sense you know‚ but I am believer that what will happen will.

“So from my side if I can keep putting myself in those situations to come close‚ I’d like myself to get there‚ but you can’t go out on a certain day and say I am going to score a hundred.

“You have got to try and be consistent‚ in your mental discipline and give yourself the best chance to succeed every ball.

“If you do that‚ you are going to face around 200 to 250 balls‚ which is what is needed in the subcontinent to score a hundred‚” said van der Dussen.

He faced 151 balls for his 64 in the first match in Karachi and‚ with composure and a bit of luck‚ will hope to face more than 200 ball to be in a good position to score his maiden Test hundred.

The only centurion of this series so far‚ Fawad Alam‚ needed 245 balls for his 109.

Depending on the match situation‚ Van der Dussen could be batting on day four on Sunday‚ on his 32nd birthday‚ and hopefully smash a maiden Test hundred.

“I’m feeling good‚ I’m batting well and yeah‚ let’s hope it comes. I mean I can’t say it will come in this game or the next game.”

It could be a memorable match for Van der Dussen if he achieves this feat‚ given that it is his first time on Pakistan soil.

“There are no guarantees in life or in cricket. I will keep putting in the work to give myself the best chance.”

Van der Dussen said it felt a bit like winter‚ like back on the Highveld in South Africa‚ when he went to assess the pitch earlier on Monday.

“I had a look at the pitch [on Monday] and it looks like most of the grass has been taken off.

“How hard they will make it is difficult to say at this stage. But yeah from looking at it‚ my first impression was that there will be much in for the new ball.”