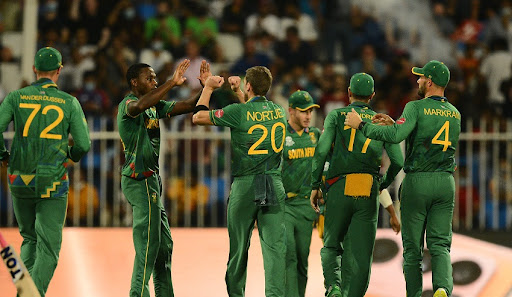 The Proteas made a low-key return to SA on Monday after their gallant yet unsuccessful T20 World Cup campaign in the United Arab Emirates.

They were gallant because they won four of their five pool matches but were unsuccessful in the end as they failed to reach the semifinal stages.

The loss against the old enemy Australia in their opening match before bouncing back with four successive wins‚ including a win over West Indies‚ Sri Lanka‚ Bangladesh and pool winners England‚ sunk them as the Aussies ended with a better net run rate than the Proteas.

While SA‚ Australia and England all won four out of their five pool matches the difference was the Proteas’ slow scoring against Bangladesh which cost them a place in the semis‚ though they can take solace from the fact that they crashed out at the expense of the only team they lost against.

The Proteas left Dubai on Monday and arrived in SA without fanfare and in dribs and drabs according to their destinations.

Team managers said the arrival in groups was because of limited flight availability from Dubai.

There was no fanfare or media activities at the airport but the Proteas captain Temba Bavuma and head coach Mark Boucher are expected to brief a press conference on Tuesday morning.

Cricket SA’s board‚ still smarting from a media and public backlash after distractingly instructing all members of the team to “take the knee”‚ which led to the shock decision by star batter Quinton de Kock to make himself unavailable‚ commended the Proteas for their “never-say-die attitude” and their “professionalism”.

CSA board chairperson Lawson Naidoo said the team displayed character‚ heart and professionalism throughout the tournament.

“I join all South Africans in thanking them for doing us proud‚” Naidoo was quoted as saying in a statement released by CSA. “SA cricket is the ultimate winner as the momentum gained and lessons learnt from this World Cup places us on a powerful upward curve for the future‚ built on the foundations of excellence‚ access and inclusivity‚” said Naidoo.

The team will rest before they assemble again to start preparations for a visit to the Netherlands for a three-match ODI series from November 26 and a blockbuster all-format tour by India‚ starting with three Tests from December 17.

“With crowds allowed back into stadiums‚ subject to appropriate Covid-19 restrictions‚ we look forward to a bumper summer of cricket and coming together as one to support our team‚” said Naidoo.