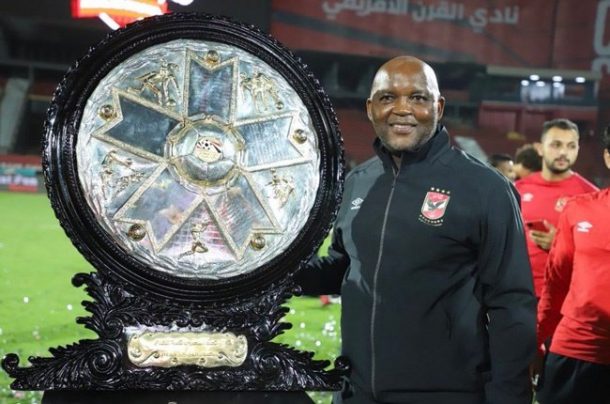 Some apparent sour grapes from some ex-Ahly players over Mosimane’s appointment last October to Africa’s Club of the 20th Century has been mixed with genuine and valid criticisms. This as Mosimane has also had to downplay the Cairo giants’ fanatical supporters’ expectations as he prepares to take the team into the delayed 2020 Fifa Club World Cup.

Mosimane will make his second appearance at Fifa’s showpiece club event‚ having taken African champions Mamelodi Sundowns to the 2016 tournament in Japan‚ when Ahly meet host team Al-Duhail in the second round at Education City Stadium in Al Rayyan on Thursday.

Abdel-Aal’s firing on Saturday appeared to have been results-related as Tanta lost 1-0 to Nogoom to remain rooted in last place in the second-tier. However‚ the 55-year-old ex-Ahly midfielder’s firing did also come a day after saying Mosimane would not be able to coach in the Second Division.

“Al Ahly management secures everything for Mosimane‚ he is in heaven‚” Abdel-Aal was quoted as saying on Kingfut.com on Friday.

“If he coached a Second Division team he would leave after one game. Mosimane cannot manage in the Second Division. He is a head coach with very limited abilities.”

Mosimane is the first black Sub-Saharan African to coach Ahly in their 113-year history and his arrival has seemingly taken some getting used to. It appears to have rubbed some-ex-Ahly players the wrong way‚ in a country used to seeing Europeans‚ South Americans and local coaches appointed at its football clubs.

The most vocal critic was Ibrahim Hassan‚ assistant-coach to twin brother and legendary Egypt striker Hossam at Ittihad‚ when responding to a 4-0 thrashing by his team by Mosimane’s Ahly in December.

However other ex-Ahly players and fellow Premier League coaches have given Mosimane – who has gone 20 matches unbeaten‚ and wrapped up a treble at the Covid-19-delayed end of the 2019-20 season‚ including the Caf Champions League trophy – only glowing praise.

“ … I admire Pitso Mosimane and I view him as an in-field coach. I got optimistic when he signed for Al Ahly‚ and he proved me right in the Caf Champions League final.”

Wael Gomaa has been among Ahly legends to praise Mosimane‚ and former Tottenham‚ Zamalek and Egypt striker Mido compared the football of the coach in a game against Entag El-Harby to that of Liverpool under Jurgen Klopp.

Ahly have suffered two draws in three league games – a mini-slump in form for a team used to winning multiple matches on the trot – going into the Club World Cup. Mosimane’s team drew 0-0 against National Bank of Egypt away‚ beat Al Mokawloon 3-2 at home‚ then drew 0-0 away to Pyramids on Friday.

If Ahly beat 2019-20 Qatar Stars League champions Duhail on Thursday they will have a tasty semifinal match-up against European champions Bayern Munich next on Monday.