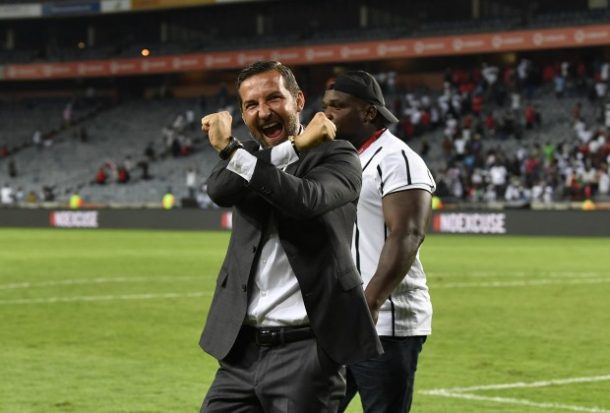 Orlando Pirates coach Josef Zinnbauer has showered his whole team with praise after they claimed the Soweto derby bragging rights against Kaizer Chiefs at the weekend.

Pirates beat Chiefs 2-1 after a late consolation goal from Daniel Cardoso was not enough to cancel earlier strikes from Thembinkosi Lorch and substitute Siphesihle Ndlovu.

“I think it was a team effort and we needed this against Kaizer Chiefs‚” said Zinnbauer.

“The derby is a special game.

“We have now won three against them [this season] and that is good for us‚ but the thinking was about the three points in this game.

“They have the quality and they are a team which you can’t easily score against. With the weather‚ it was not easy for both sets of players and in those situations you need the fight to win duels. You need a strong defensive work.

“We stayed a little bit deeper in the first half and you’ll see long balls coming behind the defence‚ but our defenders and some of the players in the midfield reacted to make good defensive work.

“For me it was a good derby‚ but you can never open the door for Chiefs and say ‘please come in’. It is not easy to defend against them‚ but the most important thing for us are the three points and it was a very good team effort.

“I thought our ‘keeper Richard Ofori was very good and our defenders were also good. I say again that it is not easy playing against Chiefs‚ but we are happy that we have the three points and we have to focus o the next game.”

Though Pirates managed to score two goals‚ Zinnbauer believes they could have scored more.

“In the last minute of the first half we had a big chance and we didn’t score‚” he said.

“That made me a little bit upset but in the second half Chiefs played long balls into the box and it was not easy to defend. But the system was to play more on the counter-attack.

“In the second half we had a good counter-attack and Siphesihle Ndlovu scored. It was very important for us to increase our lead to 2-0‚ but then Chiefs scored. I think we made some good defensive work‚ it was a good team effort that we made and we deserved the three points.”