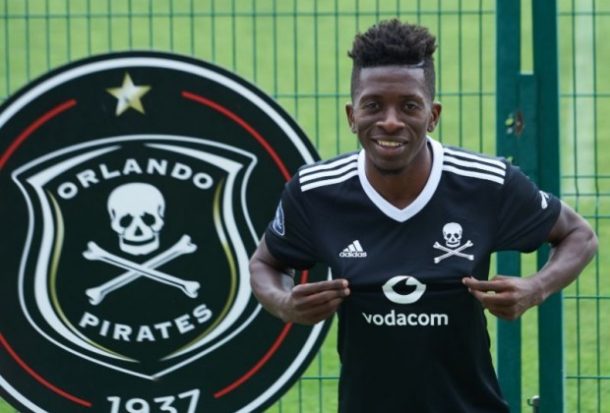 Orlando Pirates coach Josef Zinnbauer believes there is more to come from Jean-Marc Mundele now that the Congolese striker has opened his scoring account for the Buccaneers.

The highly-rated striker‚ signed on a season’s loan from AS Vita Club in November‚ has been gradually introduced at Bucs. His six appearances (three league‚ one cup‚ two continental) have all come as a substitute‚ Zinnbauer citing conditioning and tactical needs.

“Mundele scored. That’s always good for a striker – he gets more confidence [from it]. He’s coming more with his conditioning‚ he’s coming more into the game model that we need‚” Zinnbauer said in Thursday’s pre-match press conference for Sunday’s second leg at Orlando Stadium.

“And we have felt this before in the training sessions and he’s now given us the signal in the game. He had a good game.

“For a striker to score is important. And I think‚ with a game on Sunday‚ we have to see now what’s happened in the squad.”

Zinnbauer added on an encouraging performance in the first leg where three fine goals were emphatically banged in by Thulani Hlatshwayo‚ Linda Mntambo and Mundele: “ It was not just the three goals we scored‚ but also the performance we gave. This was a good team performance‚ and I’m happy about this.”

The coach could not commit on whether Mundele might finally get a start in the second leg‚ but suggested the striker would at least come off the bench again.

“A striker needs goals. He can play better if he scores goals. He scored‚ and he’s given himself more self-confidence on the field‚” Zinnbauer said.

“And‚ ja‚ maybe he has a chance on Sunday‚ the next chance maybe from the bench or the starting line-up.

“We are open for this. We have researched in this week exactly which player is ready for Sunday’s game.

“And then these players who get to play‚ if they give a good performance they have a chance they can play in the next weeks. It’s always like this‚ especially like Jean-Marc‚ who‚ as a striker scored‚ and then he has a good chance to play.”

Zinnbauer said long-term injuries Zakhele Lepasa‚ Tshegofatso Mabasa and Abel Mabaso are Bucs’ players ruled out on Sunday‚ while Gabadinho Mhango faces a late fitness test. Thabang Monare is back from a clash of heads that saw him leave the field in the 36th minute in Bucs’ 2-0 Premiership win against Cape Town City a week-and-a-half ago.