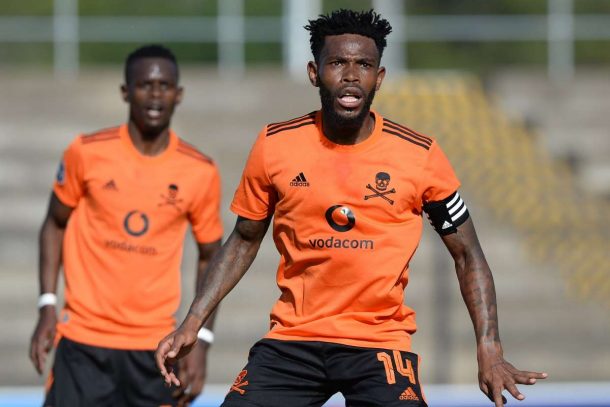 Pirates coach defends ‘Tyson’: ‘A mistake is a mistake‚ he makes another goal and nobody talks about it’

Hlatshwayo was at fault for Sundowns’ second goal as Pirates were spanked 3-0 in a DStv Premiership clash in Orlando on Sunday.

Sundowns substitute and former Buccaneer Gift Motupa pick-pocketed the ball from the 31-year-old centre-back’s possession‚ and the mistake led to Peter Shalulile doubling the lead for the champions.

“I don’t want to talk a lot about the mistakes that my players make‚ we talk about that internally‚ but I can say that always players have bad times and good times‚” said the German coach when asked to comment on Hlatshwayo’s recent shaky performances.

Hlatshwayo‚ who wore the captain’s armband in the absence of long-time skipper Happy Jele‚ came under fire from the Pirates fans after his astonishing own goal in the come-from-behind 1-1 draw against Swallows in their last league encounter last week.

The tough-tackling defender also received extensive condemnation the week before that after his error led to one of the goals as the same Sundowns thumped Pirates 4-1 in the Nedbank Cup quarterfinals on April 15.

Hlatshwayo joined Pirates at the beginning of the season on a big money move from now defunct Bidvest Wits.

He looked to have won the hearts and souls of the Ghosts with solid performances in the first half of the season‚ but has now somewhat gone off the boil in the final stretch.

Zinnbauer has put that down to a congested fixture list but the reality for the former Ajax Cape Town skipper is that he has some work to do to win back the confidence of the frustrated Buccaneers supporters.

“When we talked about him early in the season he was very strong for us. He is a leader and he fights for us.

“A mistake is a mistake. He makes another goal and nobody talks about it. He is my captain and he is a leader.

“In the moment he is a little bit unlucky‚ but he has played a lot of games and he has had no breaks‚” said the 51-year-old Zinnbauer.

“He [Hlatshwayo] is always on the field and he fights and trains hundred percent‚ he goes forward and he leads the team. It is not so easy as a leader.”

The German coach said even the best defenders in world football go through a slump in form but that does not suddenly turn them into bad players.

“He is a big player. He is a national team player and captain. He is a top player.

“You know football‚ like in Germany‚ you have had Jerome Boateng‚ who is one of the best in the world‚ but who also had problems at times in his career and he came back to his best‚” Zinnbauer said.

“This is normal and Tyson is a big player and we trust him‚ and we need him.

“You can talk to him but he knows exactly what he did‚ but the whole team was in the game and it was not only him.

Hlatshwayo has been a regular feature in the Pirates defence since joining them.

Zinnbauer said Hlatshwayo serves as a figure of inspiration for the younger players in the squad.

“He gives them motivation and talks to them to give them direction on what they can do to improve.

“He is forever helping everyone. We have to give him now a little bit more time‚ maybe he can rest and recover.”

Pirates host bottom club Black Leopards in their next league match in Orlando on Thursday at 5pm.