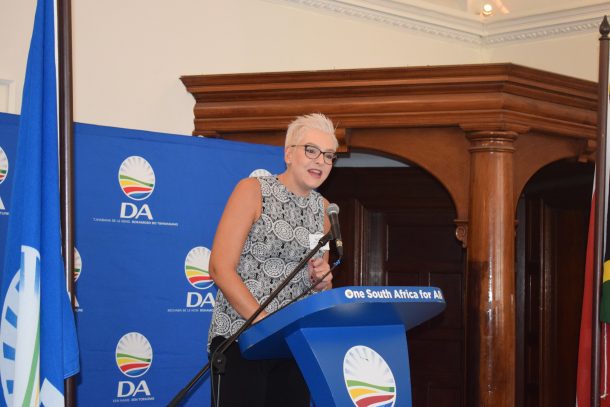 Political squabbles within the DA continue to play out in public‚ with party MP Phumzile Van Damme slamming chief whip Natasha Mazzone for saying the sabbatical offered to her was for her own good.

On Friday Van Damme‚ who was the DA’s communications shadow minister‚ was reshuffled out of the shadow cabinet and replaced by Zakhele Mbhele after being put on sabbatical by DA leader John Steenhuisen.

Van Damme said on social media on Saturday that Steenhuisen had told her he was granting her a sabbatical she did not request. She said she would legally challenge the decision.

Speaking on 702 on Monday‚ Mazzone defended the decision to grant Van Damme the sabbatical‚ saying the DA thought they were doing a good thing by offering it.

She said it was unfortunate the offer “turned into something quite ugly”.

“Phumzile has a debilitating chronic illness‚ and she has been very brave and honest about documenting it on social media and bringing awareness to illnesses people had kept quiet in the past‚” said Mazzone.

“Unfortunately‚ what we thought was doing the right thing and doing what we thought should be done in the workplace more often‚ which is showing sensitivity towards chronic illness‚ turned into something quite ugly.”

Mazzone said if Van Damme decided not to take up the sabbatical‚ it was within her right.

“Before this three months’ sabbatical was offered to her‚ she did hand in a three months’ sick leave letter and a lot of her work was covered by her deputy‚” she said.

Taking to social media‚ Van Damme reiterated she did not need a sabbatical and accused Mazzone of spreading false information.

Van Damme refuted the claims that a lot of her work was covered by her deputy‚ saying she was doing her job and that of DA MP Cameron MacKenzie while he was recovering after being shot earlier this year.

“See‚ I said I’d come back to correct false information and others let slide. Cameron MacKenzie‚ who I love and respect‚ was shot and almost died in January 2020. I covered his work for three months while he recovered. Then he was in pain most of the year and I was sick. We had each other’s backs throughout‚” said Van Damme.

“We worked together through our pain. I am so thankful for a supportive‚ kind‚ hard-working lifelong friend in Cameron. A true mensch‚” she said.

“I do not want to be a cookie-cutter version of what a politician should be. I find authenticity important in order to make connections‚” she said.

“I want people to see that‚ although I do lead a more privileged [life]‚ I’m no different from those who have struggled in various ways.”