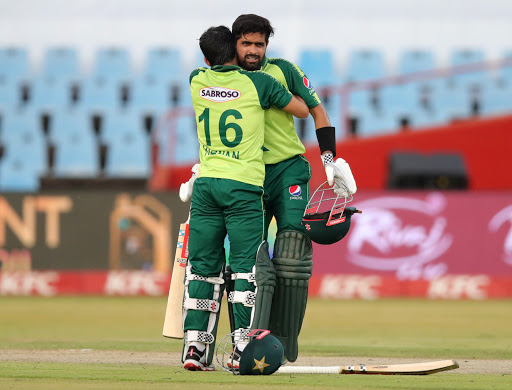 Irrepressible Pakistan captain Babar Azam delivered a batting master class at SuperSport Park as they crushed South Africa by nine wickets to take a 2-1 lead in this four match series.

In a breathtaking knock of flair‚ ingenuity and composure‚ Babar thumped a near flawless century to once again show that he is one of the best batsmen in the world across all formats.

He ended his shift on 122 off 59‚ a knock that included 15 boundaries and four maximums‚ as Pakistan bludgeoned this lightweight Proteas bowling attacking with 12 balls to spare.

Babar was supported by his wicket-keeper/batsman Mohammad Rizwan‚ who scored a useful 73 off 47‚ during this ruthless act where they exposed the weaknesses of this makeshift Proteas team that is bereft of several starting players due to injuries and the IPL.

The visitors needed their top order batsmen to step up after South Africa became the first team in seven years to score more than 200 in a T20 match Pakistan on this good flat wicket in Centurion.

This was also the first time Pakistan chased down a score of over 200 in T20s and their job was made easy by the South African bowlers who struggled for control.

Babar won the toss and inserted South Africa to bat and the Proteas responded with a good batting show of their own to score 203/5 in their 20 overs‚ but Babar and Rizwan had other ideas with a partnership of 197 off 107.

Pakistan reached their target with relative ease after 18 overs‚ Rizwan unbeaten on 73 and Fakhar Zaman on 8‚ and South Africa faced with the task of having to win the final match on Friday at this same venue to at least level the series.

In their batting innings‚ South Africa got off to good start with openers Aiden Markram and Jenneman Malan putting together a first wicket stand of 108 off 64 to lay a solid foundation.

They were so dominant against Pakistan bowlers in the early stages that after the powerplay they were on 65/0 with Markam having scored 35‚ and Malan following him closely on 28.

Four overs later their partnership reached the 100 runs mark with Markam on 56 and Malan‚ who deservedly achieved his maiden T20 half century in this match‚ standing on 42.

In the process Markram scored his third successive half century and registered his highest T20 score‚ but his party came to an end in the eleventh over and with his wicket began the South African collapse.

His wicket brought an end to his partnership of 108 off 64 balls with Malan.

He was soon followed by George Linde‚ Malan‚ Klaasen and Phehlukwayo and ultimately the South African innings ended on 203‚ which proved not to be enough as Pakistan triumphed by a comprehensive nine wickets.