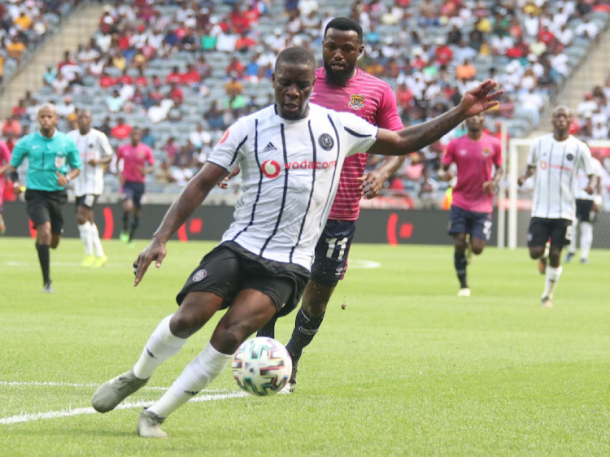 Mntambo’s departure might not come as a surprise as‚ despite some promising performances in patches‚ the ex-Jomo Cosmos and Chippa United player battled to nail down a regular first team place. He played 10 DStv Premiership matches in 2018-19‚ and 11‚ 17 and 10 in the following three seasons.

Nyauza’s exit might raise some eyebrows‚ though‚ as he was a defensive stalwart for Bucs‚ playing 24‚ 23 and 20 league matches in their last three campaigns.

At 32 and 33 respectively‚ though‚ the pair’s ages would have played a role in Bucs’ decision.

“Orlando Pirates can confirm that midfielder Linda Mntambo has moved to Sekhukhune United after agreeing terms with the club‚” Bucs said on Thursday.

“The 33-year-old will be missed in the Bucs change room for the positive spirit he brought to the squad. Though he leaves us as a player today there is no doubt he will return to his boyhood club one day to serve in a different capacity.

“Pirates can confirm the amicable parting of ways with Ntsikelelo Nyauza following a meeting between both parties on Wednesday.

“The 32-year-old defender has been at the heart of Bucs’ defence since joining in 2013. After captain Happy Jele‚ ‘Ntsiki’ was the second-most experienced player at the club with 192 appearances‚ including seven goals and four assists.”