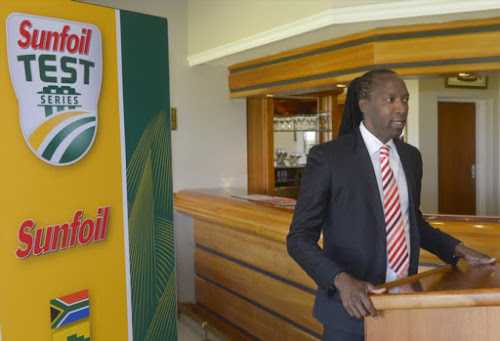 North West Cricket (NWC) board chairperson and president Dr. Oupa Nkagisang and his fellow suspended directors are facing a possible application by the governing body to have them declared as delinquents.

In a memorandum of advice submitted by Bowmans to Cricket SA on 30 September 2020‚ which was amended on 16 February 2021‚ the law firm advised that Nkagisang and his fellow directors failed to apply their minds in the allocation of a budget and implementation of the stadium upgrade project.

Nkagisang and his board were suspended in December 2018 by virtue of CSA placing the union under administration after allegations of mismanagement of funds meant for the project.

A Deloitte investigation report uncovered that over R2.2m meant for the NCW stadium upgrades was misappropriated.

This came after CSA‚ under Haroon Lorgat as CEO‚ made more than R200m available to its affiliate members to upgrade venues in preparation for T20 Global League that was to have taken place in November 2017.

NWC received a total of R10m in loans and grants to upgrade their facilities in Potchefstroom and the forensic audit and investigation has uncovered that not all the money was used on the stadium project. Some money was used for operational matters.

Deloitte submitted the report to CSA on 13 June 2019 but the forensic auditors could not conclusively find any instances of fraud or corruption committed by NWC stakeholders‚ including the board‚ involved in the execution of the stadium project.

The forensic auditors‚ according to the report‚ had “limitations” and were unable to provide an accurate indication on what the missing R2.2m was spent on.

The report‚ however‚ cited NWC’s lack of operational capacity to manage the project and questioned the professional suitability of the financial managers.

Despite the Deloitte report not finding any instances of fraud or corruption on the part of NWC stakeholders including the board‚ the Bowmans report advised that the Deloitte document contained information which provided the basis for certain allegations relating to various individuals to be investigated further.

Bowmans additional memorandum of advice pointed that there was a prima facie case for the identified individuals to answer in relation to the various allegations.

The Bowmans report leveled 12 allegations against Nkagisang and numerous others against his board of directors in their memorandum of advice to CSA.

Of the 12 allegations‚ the law firm advised that only seven of those have good prospects for success.

A CSA delegate met with a certain portion of the NWC stakeholders to map a way forward‚ but the suspended chairperson and president as well as his Board were not invited.

CSA have known about the Deloitte findings since June 2019 but sat on the forensic report until July last year when a TimesLIVE investigation discovered its existence.

To be declared delinquent‚ a director must be guilty of serious misconduct and there must be a gross abuse of the director’s position‚ gross negligence‚ wilful misconduct or a breach of trust.